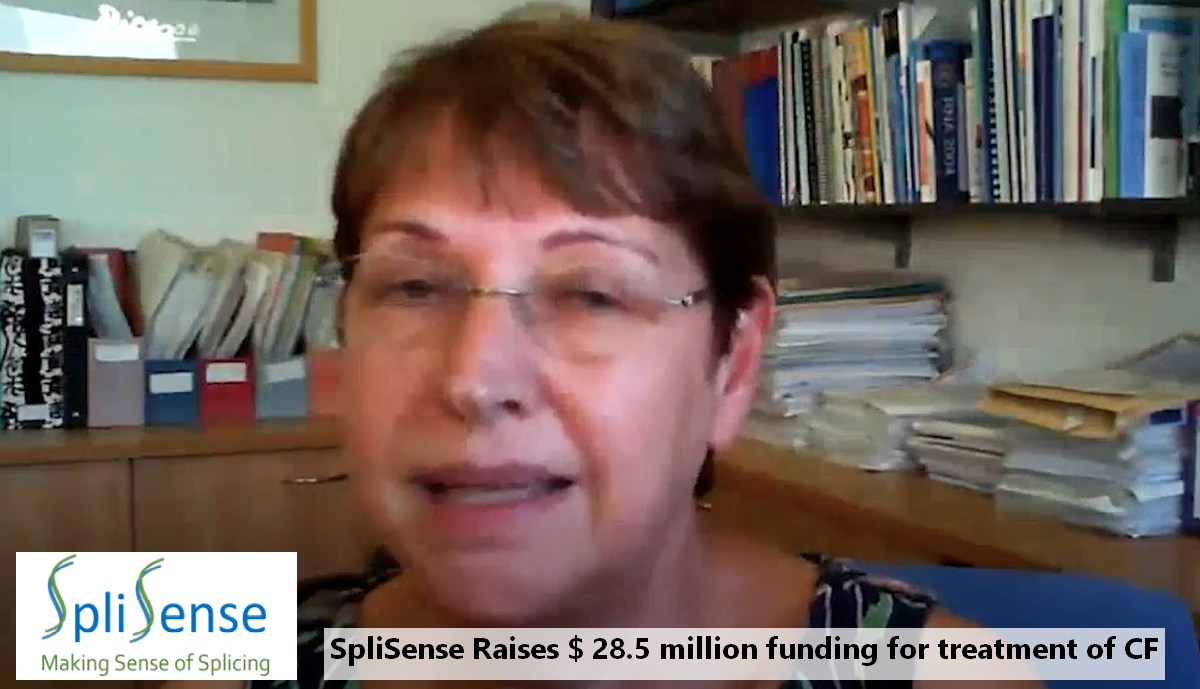 Jerusalem-based biopharmaceutical company SpliSense, which is developing transformative mRNA-altering therapies for cystic fibrosis (CF) and other genetic pulmonary diseases, announced on Thursday the closing of a $28.5 million series B funding round. Orbimed, Israel Biotech Fund, Biotel Limited, Integra Holdings and the Cystic Fibrosis Foundation participated in the round. The Cystic Fibrosis Foundation invested a total of $8.4 million, half of which is to be allocated to preclinical studies and the other half for clinical trials on humans.

SpliSense was founded by Prof. Batsheva Kerem, PhD, (in the picture) a renowned geneticist from the Hebrew University of Jerusalem, and its technology is based on her research. Kerem was part of the research team that identified and cloned the CFTR gene. The technology was licensed from Yissum, the technology transfer office of Hebrew University.

Proceeds from the series B financing will be used to advance the company’s pipeline, including its lead Anti Sense Oligonucleotide (ASO) product which has demonstrated that it is able to completely restore Cystic Fibrosis Transmembrane conductance Regulator (CFTR) channel function in patient-derived cell cultures. The company plans to initiate a Phase 1/2a trial in 2022.

CF is a genetic multisystem disorder that originates from various mutations in the CFTR gene, which is responsible for the production of the CFTR protein, a chloride channel expressed, among other systems, in the lungs. SpliSense utilizes short, precisely targeted proprietary RNA stretches called ASOs to correct various mutations in the CFTR mRNA. These novel, fully synthetic ASOs have been designed and selected as drug candidates targeting the splicing machinery. As a significant fraction of CF-causing mutations (10-15%) affects pre-mRNA splicing, leading to the generation of aberrantly spliced CFTR transcripts, SpliSense is now developing a targeted modulation approach aimed to correct the splicing pattern of CFTR transcripts, according to the specific mutation carried. This strategy will interfere with the aberrant CFTR splicing in patients carrying splicing variants/mutations leading to the generation of normal full length protein and restoration of the CFTR function. Prof. Kerem, an expert geneticist, identified and cloned the CFTR gene.

“CF is a debilitating disease, leading to frequent lung infections, breathing difficulties and reduced life expectancy. Currently available treatments focus on treating the symptoms of the disease, such as channel function and protein modulators, antibiotics to treat lung infections, or mucus thinning drugs. However, they do not treat the root cause of the disease,” said Gili Hart, PhD, Executive Officer at SpliSense. “Our technology addresses the underlying genetic cause, thereby offering, for the first time, hope of restoring adequate lung function to CF patients. We look forward to using this funding and the support of the Cystic Fibrosis Foundation to advance our pipeline for the benefit of CF patients.”

Dr. Nissim Darvish, MD, Chairman of the Board of SpliSense, “SpliSense couples Prof. Kerem’s pioneering research on the genetic underpinnings of CF together with a strong track record in developing ASO therapies and inhaled treatments. We have great faith in SpliSense‘s transformative technology for the genetic treatment of CF and await with interest the advancement of its pipeline into the clinic, as well as its expansion to additional indications.”

Established by Integra Holdings in 2016, SpliSense is developing novel drug candidates based on antisense oligonucleotides (ASOs) targeting major splicing mutations in genetic diseases. SpliSense is currently focusing on splicing mutations in the CFTR gene for treating Cystic Fibrosis (CF) patients. SpliSense was founded by Prof. Batsheva Kerem, PhD, a renowned geneticist from the Hebrew University of Jerusalem, and its technology is based on her research. The technology was licensed from Yissum, the technology transfer office of Hebrew University.