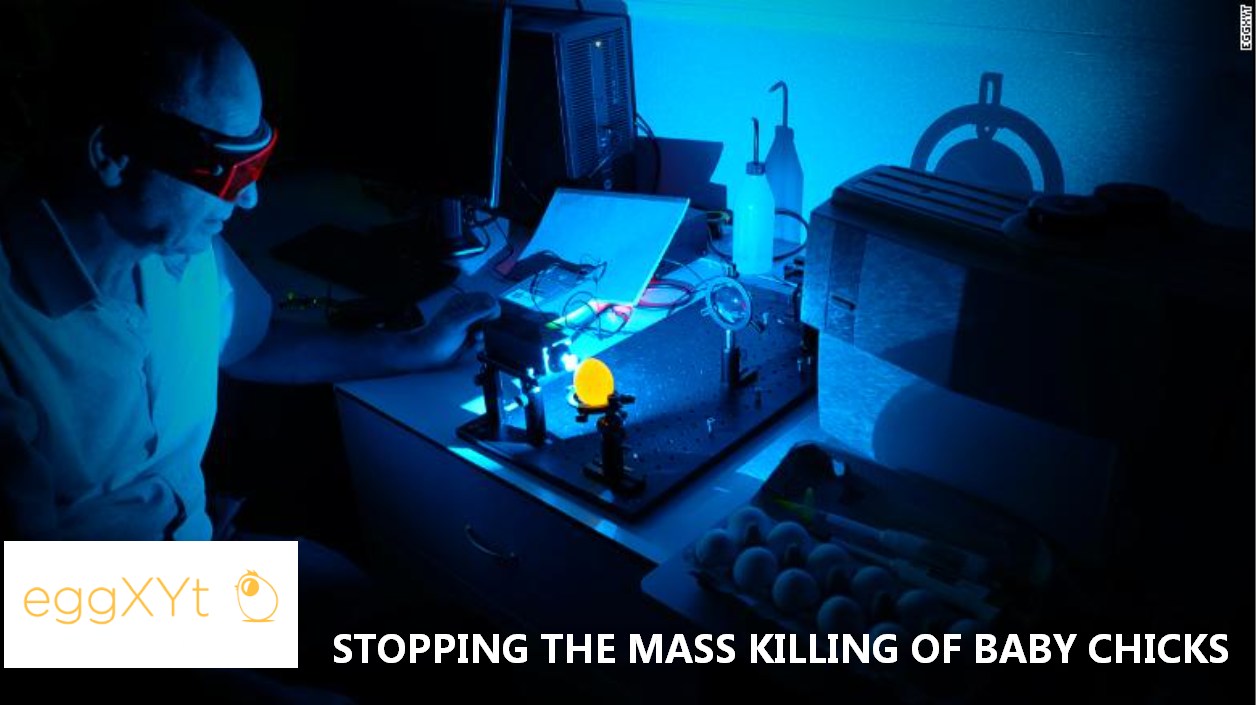 eggXYt, a Jerusalem-based genetic tech startup, is developing technology to save billions of baby chickens from unnecessary death, while generating significant savings for farmers. eggXYt also recently announced an investment from Solve Innovation Future, a philanthropic venture fund based at MIT, https://solve.mit.edu/solve-innovation-future-investments that will help support more R&D and commercialization of its products. eggXYt has chosen Avian Influenza– the deadly “bird flu” as its next target and has licensed from UK-based Tropic Biosciences their “Gene Editing induced Gene Silencing” (GEiGS) technology to develop genetic resistance in chickens against Avian Influenza Virus.

Most consumers, however, do not know that the egg industry slaughters billions of animals every year and discards them. In ‬modern-day poultry farming, ‬the males are useless:‬ They cannot grow up to lay eggs, ‬and they are not the fast-growing breeds that are sold as poultry‭.‬ Hatcheries macerate or asphyxiate seven billion male chicks each year, resulting in a global financial loss of $1 billion annually. This process, known as “culling,” is performed only after chicks have hatched and a professional chicken sexer has determined whether they are male or female.‬‬

“Prof Dani Offen, co-founder and Chief Science Officer of eggXYt, was astounded at the time by the sheer amount of waste in an industry whose end product so many consumers enjoy,” says Yehuda Elram, cofounder and CEO of eggXYt. At the same time, Elram says, “he was aware of the revolutionary developments happening in molecular biology and thought, why not put some sort of marker just on the male chicks, so that we could weed them out before incubation and prevent the 7 billion unnecessary deaths?”

Professor Dani Offen, who directs a neuroscience lab at the Tel Aviv University, had seen a video of live male chicks being ground up for disposal, and as a scientist with expertise in gene editing, he figured that CRISPR, a gene editing tool, could be applied to prevent male chicks from being incubated, hatched, and then destroyed.

eggXYt is one of a number of startups working on this issue, but it is the only one to have developed a non-invasive, pre-incubation method. Using CRISPR, a gene editing tool, they insert a detectable biomarker into the laying chicken’s DNA, which marks the gender of the eggs without any side effects. The laid eggs are then sent through a scanner that identifies the male eggs by picking up a signal from the biomarker. Importantly, the female eggs that actually reach market do not contain the biomarker and are therefore identical to what we consume today.

“Our accuracy rate can intuitively be extremely high, because we are detecting a binary signal. Additionally, our scanner is non-invasive so it has no effect on the hatchability of the female eggs. And it leaves the industry with the seven billion male unincubated eggs as a product rather than waste,” says Elram.

eggXYt has not come too soon. The industry is poised for change. In the U.S., an industry group called United Egg Producers pledged in 2016 that it would stop culling male chicks as soon as it was economically feasible, though it said in 2020 that a workable solution didn’t yet exist. Governments, particularly in Europe, are also taking legislative action. France plans to ban the practice by 2022, while Germany announced just this week that it was banning chick culling starting in 2022 and that all solutions acting after Day 7 of incubation would be banned starting in 2024, due to animal welfare concerns.

While eggXYt would not disclose its value, the company has been granted in total roughly $4 million in grants from the Israeli Innovation Authority, EU Horizon 2020 and other awards, says Elram.

Following success of its flagship product, eggXYt has also turned its attention to Avian Influenza– the deadly “bird flu” that has led to the slaughter of millions of poultry and threatens human health as well.

“Avian flu was chosen as our next target because it is the number 1 pain point for the industry from a health point of view,” says Elram, adding that the company recently hired Dr. Caroline Noah to lead its new Animal Health Unit.

The current approach to protect poultry from Avian flu is vaccination. However, vaccines are expensive and must be administered individually, which causes bottlenecks. Additionally, vaccines do not cover all flu strains. As such, to date vaccines have been shown to only reduce, not eradicate, outbreaks.

“Our new approach will produce chickens that have intrinsic, wide-range, genetic resistance throughout their whole lifetime and on to their offspring,” says eggXYt Head of Research Malkiel Cohen, who has a PhD in human genetics and taught biology at MIT.

Cohen says other genome-editing technologies to develop influenza-resistant chickens may present greater risks of harmful effects, because they seek to edit the genetic sequences that code for proteins. By contrast, eggXYt’s approach is to edit sections of DNA that regulate how much a protein is expressed.

eggXYt’s mission is to enable a sustainable future in the livestock industry. eggXYt’s flagship product is a proprietary CRISPR based technology, which allows for non-invasive pre-incubation sex detection in chicken eggs–saving 4 billion male chicks from being unnecessarily hatched and disposed of each year, saving the industry billions of dollars and adding 4 billion eggs to the global supply. eggXYt was recently selected as a Sustainable Food Systems Challenge Solver team by MIT Solve. eggXYt was founded in 2016 and is based in Jerusalem & Tel Aviv, Israel.