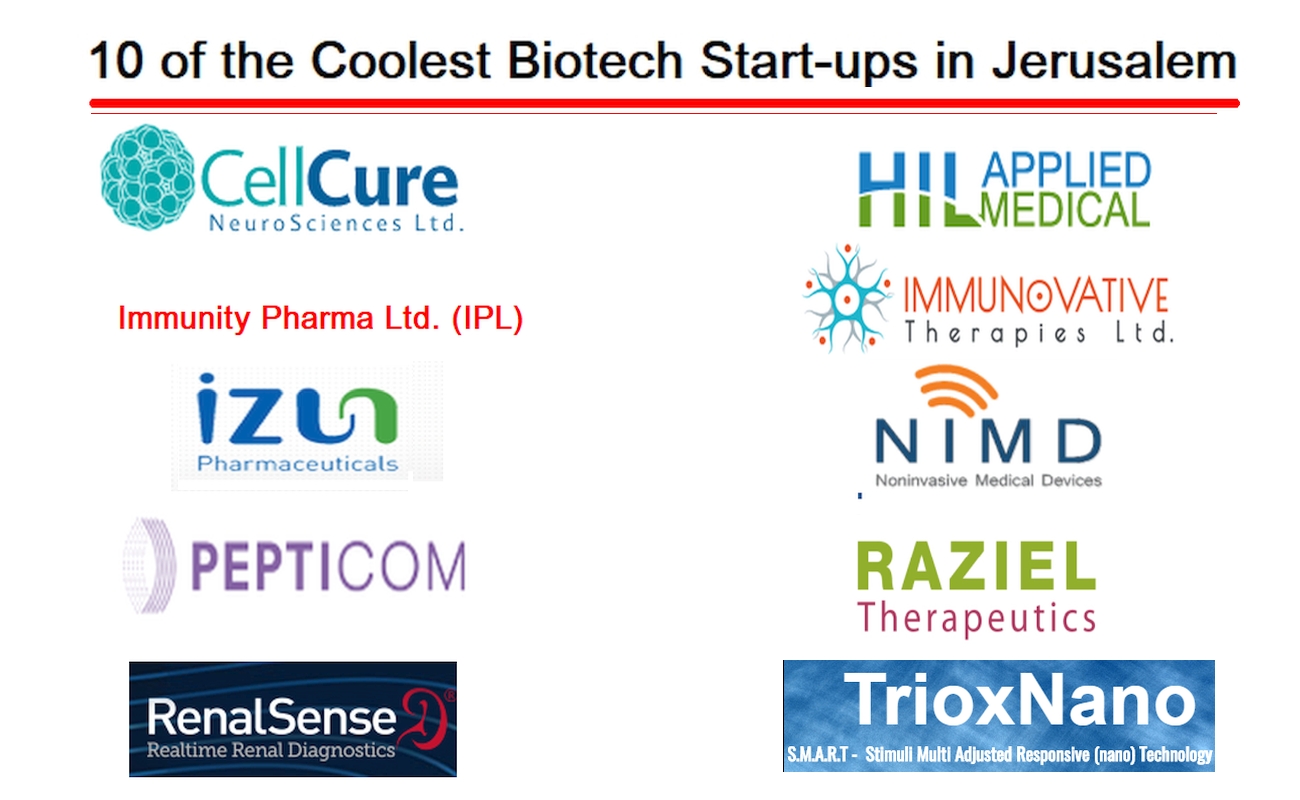 September 25, 2017 – Amazing new technologies for beating conditions including breast cancer, ALS and obesity are under development in Israel’s capital city.

Jerusalem’s life-sciences cluster includes three innovation centers and 140 biomedical companies. About two-thirds of those companies are involved in biopharma (making drugs from living sources rather than chemicals).

“Our vision is to see Jerusalem’s bio-ecosystem becoming a global leading community,” adds JLM-BioCity CEO Yaron Suissa. “In the past few months we had five international bio-delegations visiting Jerusalem as well as many startups and investing entities. Our job is to know our community at the professional level and promote it both at the strategic and operative levels.”

1. Cell Cure Neurosciences is developing therapies for retinal and neural degenerative diseases using human embryonic stem cells. This approach could be used for industrial-scale manufacture of any cell type in the human body. Cell Cure is making a specific retinal cell with the potential to treat dry age-related macular degeneration, a leading cause of blindness in people over age 60.

2. HIL Applied Medical aims to “democratize” proton-beam radiation therapy (PBT) for treating cancer by making PBT machines – currently one of the most expensive medical devices in history — dramatically more compact and affordable. PBT is the most advanced form of radiation therapy today, but is available to fewer than 5% of eligible patients due to its very large footprint and prohibitive cost.

3. Immunity Pharma is a clinical-stage biopharma company developing a novel orphan drug targeting key drivers of ALS to slow disease progression and prolong survival. A compassionate clinical treatment of an advanced stage ALS patient resulted in significantly prolonged survival. A Phase II clinical trial will start soon. Future targets for the drug under development might include neurodegenerative diseases such as Parkinson’s and Alzheimer’s.HIL’s proton therapy system, based on technology patented at the Hebrew University in Jerusalem, is expected to be half the size and one-third the cost of existing PBT machines. HIL investor Ion Beam Applications of Belgium has signed a co-commercialization agreement. HIL is establishing an R&D center at the University of Nevada and will establish its North American headquarters in Reno.

4. Immunovative Therapies has a patented biological drug, AlloStim, which acts as a customized vaccine against a patient’s own cancer cells. It’s derived from the blood of healthy donors and combined with pieces of the patient’s tumor. In a Phase I/II clinical trial, 11 of 42 terminally ill metastatic cancer patients with a 60-day life expectancy were still alive at the two-year follow-up.

6. NIMD is developing Hyperthermed, a walk-in painless, noninvasive procedure for eliminating localized breast-cancer tumors (and other solid tumors such as melanoma and gioblastoma) without harming healthy surrounding tissue. A prototype device is being readied for advanced preclinical testing. Hyperthermed focuses microwave radiation on FDA-approved nanoparticles injected directly into the tumor. The heated nanoparticles are selectively absorbed, destroying only the cancer cells. The product will also noninvasively detect early-stage tumors, image them and monitor their temperatures.

7. Pepticom is a groundbreaking artificial intelligence (AI) company with a machine-learning platform for the discovery of innovative peptides and small molecules for drugs, agriculture and animal well-being, at a fraction of the time and cost of the traditional laboratory methods and with higher discovery success rates. The company has projects with the Eli Lilly Open Innovation program, Hadassah Medical Center and others. Several molecules are in the stage of animal testing prior to preclinical trials.

8. Raziel Pharma is developing a proprietary injectable drug to treat obesity by enhancing thermogenesis (heat production) to correct the imbalance caused by consuming more calories than the body normally can burn. Raziel’s first clinical trial in the United States showed a 30%-50% reduction in subcutaneous fat at the treated site after one injection, with effects lasting several months. The drug candidate will advance to a Phase IIa study later this year under the US Food & Drug Administration.

9. RenalSense has developed the first urine monitoring system that continuously and automatically measures urine flow for real-time assessment of kidney function in ICU patients. Fluctuation alerts are transmitted to the medical staff 24/7 and have been clinically shown to provide early signs of acute kidney injury when early intervention can be effective. In 2016, RenalSense completed a 50-patient clinical trial at Hadassah Medical Center and Herzog Hospital in Jerusalem. A US pilot was recently launched at New York’s Mount Sinai West, and a multi-center trial is scheduled for later this year at two major US medical centers. Commercial launch is planned for November this year.