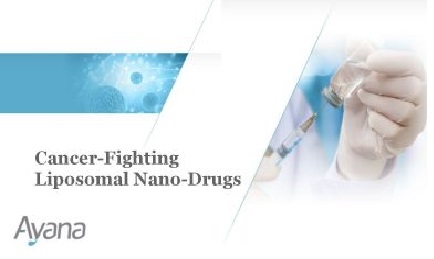 The American Food and Drug Administration (FDA) has approved a groundbreaking, complex, generic drug indicated for the treatment of ovarian cancer, multiple myeloma and Karposi’s Sarcoma. Jerusalem based Ayana’s Doxorubicin-HCl Liposomal Injection will now be available on the US Market. The drug is a modified chemotherapy treatment that targets cancer cells directly, thereby reducing side effects.

Padagis Executive Vice President and Chief Growth Officer, Colter VanStedum, stated “This launch is the culmination of several years of working with the Ayana team to bring this highly complex product to market. By also highlighting our business development capabilities in leveraging our regulatory & technical expertise and commercial platform, we are able to bring this unique product to our customers and patients in need of a high-quality generic alternative.”

The drug was developed by Professor Yechezkel Barenholz, a world expert in biochemistry, nanotechnology, and drug development and the winner of the 2020 EMET Prize for exact sciences. Berenholz is also the inventor of Doxil, the world’s first nanotechnology drug approved by the FDA in 1995. Doxorubicin-HCl is the generic version of Doxil, which had first been produced by Johnson and Johnson He has written over 420 scientific publications and owns more than 55 patents.

The treatment leverages the drug doxorubicin – a cytotoxin or chemotherapy drug – encapsulated in a closed lipid sphere called a liposome. A liposome can be imagined as a small “ball” the size of a virus, explained Professor Yechezkel Barenholz. The ball is made of an envelope made of special “fat” molecules with a watery solution inside. These balls are referred to as nano-liposomes.

The targeted technology helps solve one of chemotherapy’s biggest challenges: side effects. The treatment reduces hair loss, gastrointestinal issues, and other results of chemo which attacks all cells equally – both healthy and cancer ones.

“When a patient does not suffer from so many side effects, the compliance rate is much better and it is much easier to treat the patient,” Ayana CEO Gal Cohen said.

Over the last decade, while the company was working on the treatment, other novel treatments for cancer have also been developed. This includes, for example, monoclonal antibodies But Cohen said that many of these new treatments are cost inhibitive and don’t work for everyone. Chemotherapy is still the most consistently effective treatment for cancer.

Barenholz founded Ayana in 2012 at the request of several oncologists and cancer patients when J&J struggled to manufacture Doxil. It was clear that a generic drug much less expensive was needed, making it more accessible to those in need. Ayana Pharma is positioned to expand the uses and efficacy of the lipid-based cytotoxic drug’s well-established clinical profile.

It took from the end of 2012 until now to obtain FDA approval after building the ability to produce Doxorubicin-HCl in Israel according to GMP (Good Manufacturing Practice) and other FDA requirements for US marketing authorization.

Cohen, who joined Ayana in late 2020, led the team to obtain the FDA approval and for commercial launch readiness.

Although Ayana is a small company of only 12 employees, Cohen said it has a pipeline of other products that it is working on, centered on liposomal nano drug technology.

“We believe that it is cutting edge technology and that many people could benefit from treatment through this delivery system,” Cohen said.

He did not indicate which diseases might be targeted next, but he said not all of the company’s drugs will be used for cancer.

The drug will be made available through a strategic partnership with Padagis, which was recently acquired for $1.55 billion by Altaris from Perrigo, a company that has been operating since 1887. Padagis provides hundreds of topical and other specialty pharmaceuticals to its primary markets of the United States and Israel, has annual sales of around $1 billion and employs over 1300 people worldwide. The companies are ready for the commercial launch of the drug.

News on the many life science and healthcare companies in the Jerusalem area can be seen at
https://jlm-biocity.org/jlm-biocity-innovations/

JLM-Biocity is a non-profit organization focused on developing Jerusalem’s bio-community.

We invite you, researcher, professional, investor, and executive to become part of our vision in building Jerusalem’s Biomed eco-system.

If you want your company featured in our blogs or news releases, please contact:
info AT jlm-biocity.org