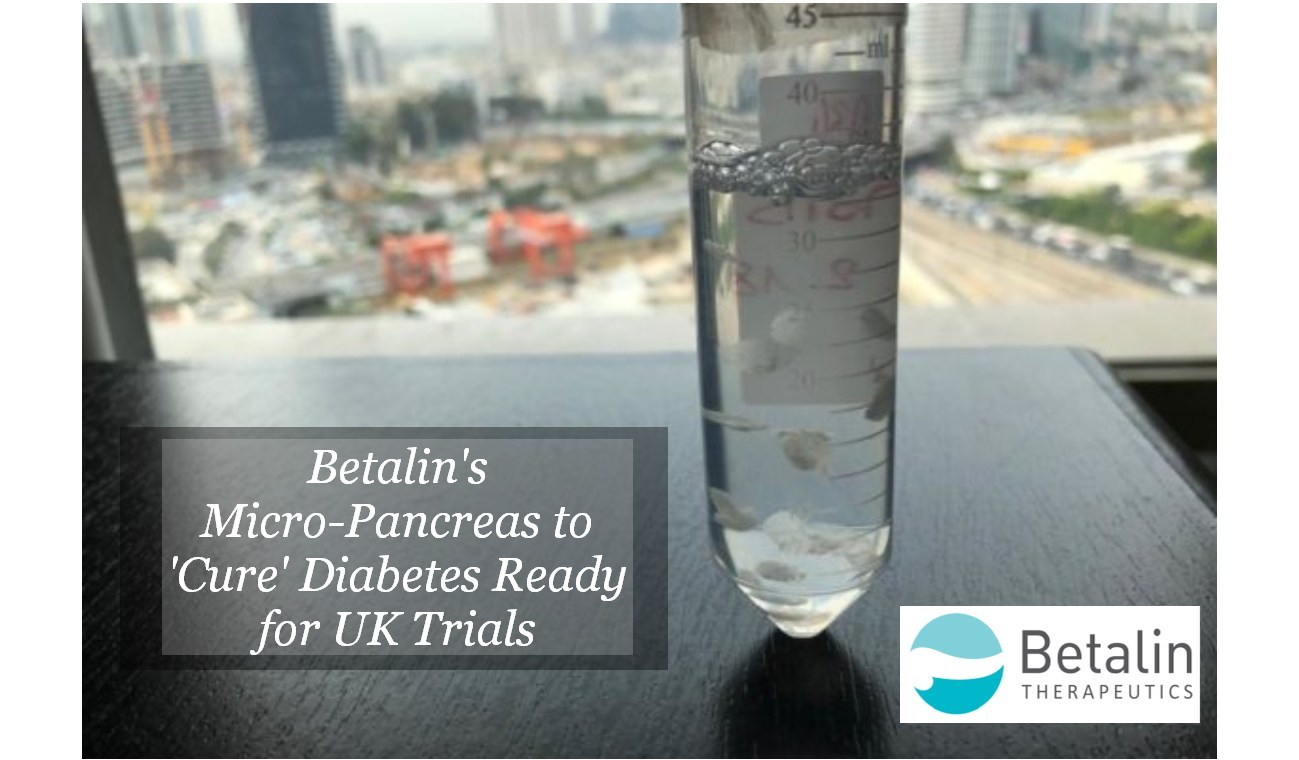 Jerusalem based Betalin Therapeutics will be submitting a request to Britain’s regulatory agency in August for human clinical trials in the UK, for their Endocrine Micro-Pancreas (EMP™), which the company claims can “cure diabetes for millions of people. Testing will begin in 2021 and could possibly enter the market by 2024. Betalin is exploring possibilities for clinical trials in the USA.

Betalin Therapeutics’ “bio-artificial” pancreas aims to free patients of the need for insulin injections and blood sugar monitoring. It is designed for people with type 1 diabetes, and those with type 2 diabetes who require insulin.

Central to the innovation is a biological scaffold, adapted from pig lung tissue, that holds beta cells. Those cells release insulin based on the patient’s blood sugar levels. The miniature artificial pancreas, just visible to the naked eye, is implanted under the skin on the thigh using local anesthesia.

“Our unique technology allows the body to heal itself,” said Nikolai Kunicher, the chief executive of Betalin. “For now, the focus is on diabetes, but there are many more diseases that we intend to cure with the aid of this technology.”

More than 460 million people live with diabetes, according to the International Diabetes Federation, although not all have been diagnosed. A 2016 study by the World Health Organization found the metabolic disorder was the seventh most common cause of death, above road injury.

The company said it chose to conduct tests in Britain because the country had already approved another diabetes treatment, called the Edmonton Protocol, in which beta cells are implanted on the liver. But Betalin said its Endocrine Micro-Pancreas (EMP™) would be more robust, longer lasting, and cheaper, although its still likely to cost more than $40,000 (£31,000).

Trials are planned in several hospitals affiliated with the Leeds and Newcastle universities, with Dr Omar Masood, a UK transplant surgeon at the St James Hospital in Leeds, with experience in combating diabetes, directing the project.

Betalin’s advisory committee includes two Nobel laureates in chemistry, both of whom have diabetes – Sidney Altman of Yale University and Arieh Warshel of the University of South Carolina.

It has received grants amounting to about $ 1m from the EU and raised more than $7.5m from Chinese, US and Israeli investors.

Established in 2015, Betalin Therapeutics is developing a biological micro pancreas implanted with human-source pancreatic islets, based on 10 years’ research led by Hebrew University’s Professor Eduardo Miterani.. The Endocrine Micro-Pancreas (EMP™) is intended to be transplanted subcutaneously to patients suffering from Type 1 or severe Type 2 diabetes and restore their ability to produce insulin and have normal glycemic control. The Company has an exclusive worldwide licensing agreement for the EMP™ technology with Yissum, the Technology Transfer Company of The Hebrew University of Jerusalem.