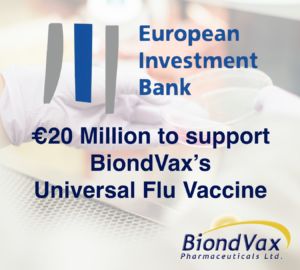 BiondVax Pharmaceuticals Ltd. (Nasdaq: BVXV), developer of M‑001, a clinical phase 3 Universal Influenza Vaccine candidate, recently  announced the receipt of a €6 million disbursement from the European Investment Bank (EIB). These funds are the second tranche of the previously announced €20 million co-financing agreement signed in June 2017. The first tranche of €6 million was received by BiondVax in June 2018.

Carlos Moedas, European Commissioner for Research, Science and Innovation said, “A healthier population is a major priority for the EU, and preventing and treating the flu is becoming more and more important with the ageing of the European population. As the virus rapidly changes, we need to develop new ways to combat the disease. This €20 million loan agreement will help develop a more universal vaccine, effective in preventing a range of different types of flu.”

Dr. Ron Babecoff, BiondVax’s CEO, stated, “I am grateful to the EIB for their ongoing support, which has helped us reach our targets including the recent launch of our pivotal Phase 3 trial. We  have the resources to launch Phase 3 trials and set-up a mid-sized commercial manufacturing plant. The EIB’s funding is a monumental step forward for BiondVax towards bringing M-001 to the market.”

The technology behind BiondVax’s universal flu vaccine candidate was conceptualized in the lab of Professor Ruth Arnon at the Weizmann Institute of Science. Professor Ruth Arnon  was also the codeveloper of the highly successful multiple sclerosis drug Copaxone which was marketed by Teva.

The EIB-BiondVax non-dilutive co-financing agreement, which was signed in June 2017, is structured as a zero-percent fixed interest loan, available for up to 36 months from the date of signing with a variable remuneration based on royalties of net sales of M-001 following commercialization. Funds will be advanced in three tranches. The tranches are available up to 12, 24, and 36 months following the date of the agreement, and are dependent on achievement of certain specified milestones. The tranches are repayable five years after each drawdown. BiondVax retains the option to repay the loan and repurchase the royalties at any time.

BiondVax (Nasdaq: BVXV) is a Phase 3 clinical stage biopharmaceutical company developing a universal flu vaccine. The vaccine candidate, called M-001, is designed to provide multi-season protection against current and future, seasonal and pandemic influenza virus strains. BiondVax’s proprietary technology utilizes a unique combination of conserved and common influenza virus peptides, activating both arms of the immune system for a cross-protecting and long-lasting effect. In a total of 6 completed Phase 1/2 and Phase 2 human clinical trials, covering 698 participants, the vaccine has been shown to be safe, well-tolerated, and immunogenic. Please visit www.biondvax.com.