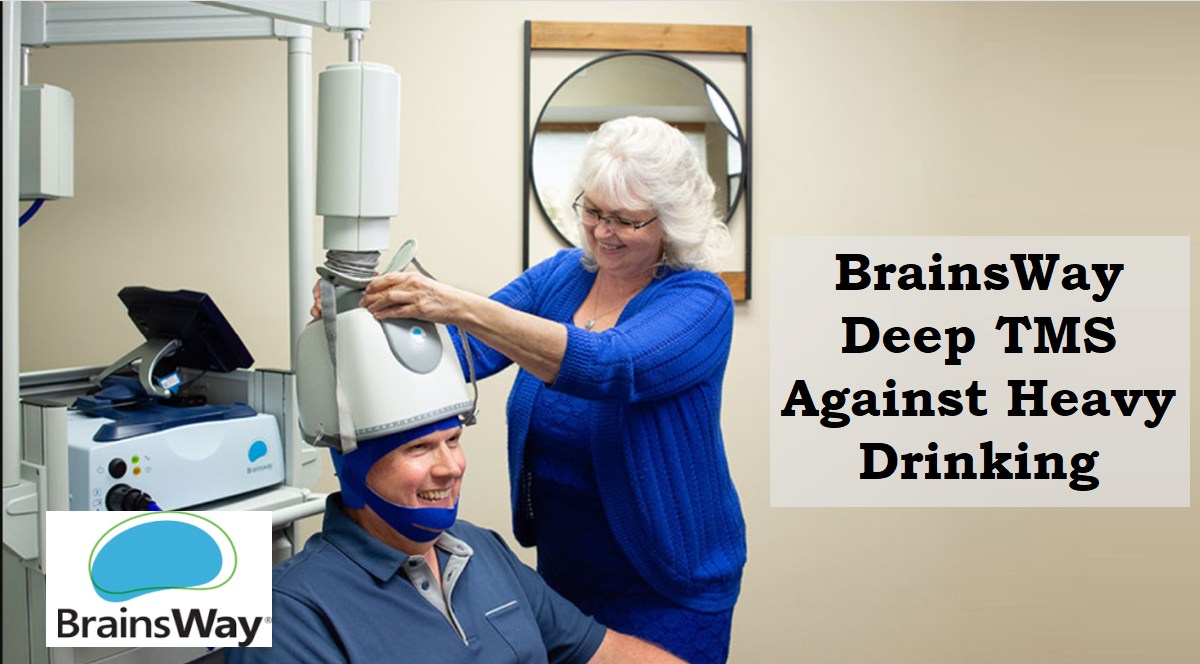 BrainsWay Ltd. (NASDAQ & TASE: BWAY), a global leader in the advanced non-invasive treatment for mental health disorders, published in the scientific journal Biological Psychiatry a new randomized, placebo-controlled, double-blind clinical trial assessing the safety and efficacy of the Company’s proprietary Deep TMS™ System for adults with Alcohol Use Disorder (AUD). A presentation of the results of the study was given at the 4th International Brain Stimulation Conference in Charleston, South Carolina.

The pilot study analyzed data from 46 subjects and revealed encouraging efficacy data relative to placebo in adults with AUD. The primary endpoint of the trial was the reduction in the Percentage of Heavy Drinking Days (pHDD) over the twelve-week period after the Deep TMS™ treatment. A heavy drinking day was defined as a day during which four or more drinks were consumed for women or five or more drinks for men. Subjects in the active Deep TMS™ group had an average of 2.9 pHDD during the three-month follow-up period compared to 10.6 pHDD in the placebo, a clinically meaningful and statistically significant difference. The H7 Coil is designed to target the medial prefrontal cortex (mPFC) and the anterior cingulate cortex (ACC), structures both associated with AUD.

“We are excited about the results of this feasibility study of Deep TMS™ for patients suffering from alcohol use disorder,” said Christopher Boyer, Vice President of Global Marketing for BrainsWay. “Like many other mental health disorders, there have been a number of reports showing that the global pandemic has exacerbated the prevalence of the alcohol use disorder. With limited treatment options for this life-altering disorder, it is promising to see that Deep TMS™ therapy may have a meaningful role in addressing this serious worldwide health issue.”

Previous studies suggest that lowering alcohol consumption for several weeks among patients suffering from AUD can initiate the recovery of executive and general cognitive functioning, as well as structural and functional modifications throughout the brain. As such, the reduction in consumption induced by active treatment suggests that Deep TMS™ may be a powerful tool in benefitting those suffering from AUD.

“While we are gaining accumulating knowledge of brain circuits implicated in addictions, it is exciting to present these promising results achieved with Deep TMS™ in AUD patients” said Prof. Abraham Zangen, Head of the Brain Stimulation and Behavior Lab and the Chair of the PsychoBiology Brain Program at Ben-Gurion University and a scientific consultant for and member of the board of directors of BrainsWay. “This feasibility study, which also included brain imaging measures, is a first step in more fully understanding the potential benefits of Deep TMS™ for patients suffering from AUD.”

Prof. Zangen will present the findings of the study, along with data on Deep TMS™ in other addictions including smoking addiction, as part of a featured symposium being held today on novel brain stimulation treatments at the Brain Stimulation Conference, a gathering of prominent researchers and global market leaders in the neuroscience space.

The randomized, controlled, double-blind study was conducted at Ben-Gurion University and the Soroka Medical Center, Beer Sheva, Israel. Data from 46 subjects who completed the acute phase of the treatment course – out of 51 eligible subjects who were enrolled in the study and initiated treatment – was analyzed. Participants were divided into two groups receiving either 20 sessions of Deep TMS™ with the H7 Coil or placebo stimulation over the course of three months, with five sessions per week during the first three weeks (acute treatment) and five maintenance sessions during the three months of follow-up. Results revealed that the reduction in the percent of heavy drinking days in the active Deep TMS™ group was significantly greater than that of the placebo group (p = 0.037). Likewise, the reduction in craving levels, a secondary outcome, was significantly greater inactive participants versus sham (p = 0.01).

In addition, functional MRI performed before and after the acute treatment revealed that active stimulation modified the connectivity between the ACC and the mPFC as well as the caudate, which may indicate an increased ability to overcome alcohol cravings.

For both the active and placebo groups, treatments were administered following symptom provocation which was tailored to the subject’s specific alcoholic beverage preferences. The primary endpoint was the difference between the groups in the pHDD reduction, as measured during the three-month follow-up period.

Additional evaluations included modifications to structural and functional brain imaging measures. Participants were active alcohol consumers who consumed alcohol in the past month but not in the five days prior to the first MRI scan and/or the first treatment Deep TMS™ treatment session. During the acute treatment phase, in which relapse to alcohol drinking was prohibited for safety reasons, urine samples were collected daily for alcohol biomarkers. During the follow-up phase, urine samples were collected only during the Deep TMS™ maintenance treatment visits. Consumption and craving were assessed using standard questionnaires.

The BrainsWay Deep TMS™ H7 Coil was used in the study and included a placebo element situated within the helmet to facilitate patient and provider blinding. The placebo element produces an acoustic artifact and scalp sensations similar to those achieved with active stimulation from the Deep TMS™ H7 Coil, albeit with a negligible induced electric field that is insufficient to lead to a therapeutic effect.
No serious adverse events or side effects were reported in the study.

About Alcohol Use Disorder (AUD)

The most prevalent substance use disorder globally, alcohol use disorder (AUD) encompasses the collection of clinical conditions associated with an inability to cease or control alcohol consumption including alcohol abuse, alcohol dependence, alcohol addiction, and alcoholism. As of 2018, there were more than 280 million people worldwide with AUD, and in 2019, 14.1 million adults were living with AUD in the United States. Factors contributing to developing AUD include alcohol misuse (e.g., binge drinking and heavy drinking), drinking at an early age, genetics and family history, and mental health conditions such as depression and post-traumatic stress disorder. The economic burden of AUD in the US in 2010 was calculated at $249 billion per year.

BrainsWay is a global leader in advanced noninvasive neurostimulation treatments for mental health disorders. BrainsWay is boldly advancing neuroscience with its proprietary Deep Transcranial Magnetic Stimulation (Deep TMS™) platform technology to improve health and transform lives. BrainsWay is the first and only TMS company to obtain three FDA-cleared indications backed by pivotal studies demonstrating clinically proven efficacy. Current indications include major depressive disorder (including reduction of anxiety symptoms, commonly referred to as anxious depression), obsessive-compulsive disorder, and smoking addiction. BrainsWay is dedicated to leading through superior science and building on its unparalleled body of clinical evidence. Additional clinical trials of Deep TMS™ in various psychiatric, neurological, and addiction disorders are underway. Founded in 2003, with offices in Burlington, MA, and Jerusalem, Israel, BrainsWay is committed to increasing global awareness of and broad access to Deep TMS™.

For the latest news and information about BrainsWay, please visit www.brainsway.com.

JLM- BioCity is a non-profit organization focused on developing and excelling Jerusalem’s bio-community.

If you want your Company featured in our blogs, news releases, please contact: info AT jlm-biocity.org