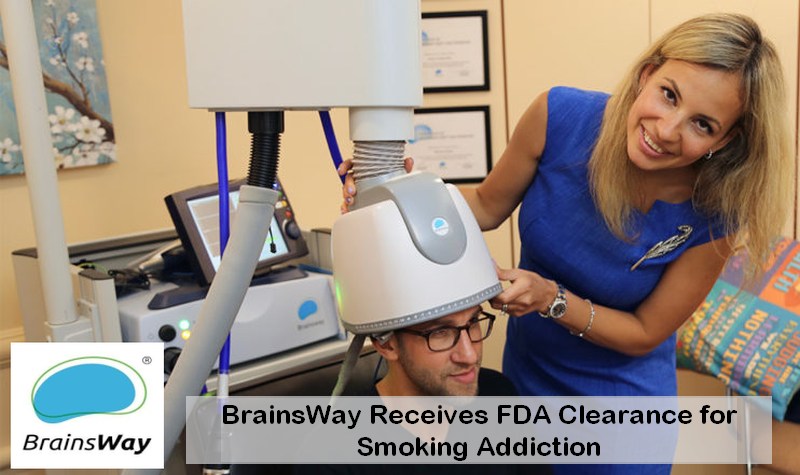 BrainsWay Ltd. (NASDAQ & TASE: BWAY), a global leader in the advanced non-invasive treatment of brain disorders, has received 510(k) clearance from the U.S. Food and Drug Administration (FDA) for the Company’s deep transcranial magnetic stimulation (Deep TMS) system for its use as an aid in short-term smoking cessation in adults.

“This FDA clearance represents a significant milestone for BrainsWay and our Deep TMS platform technology,” stated Christopher von Jako, Ph.D., President and Chief Executive Officer of BrainsWay. “Smoking is one of the leading causes of death in the U.S. and also leads to other serious conditions, such as lung cancer and heart disease. While other therapies are currently available, a substantial medical need continues to exist for treatments that can increase the continuous quit rate among smokers. Based on the compelling data from our large, randomized pivotal study of 262 subjects, we are confident that our Deep TMS technology can play an important role in treating cigarette smokers who seek to quit. We look forward to executing a controlled U.S. market release of our newly cleared and proprietary H4 Deep TMS coil for this indication early next year.”

Brainsway is  planning to conduct a controlled-market release at a few sites in early 2021 before eventually performing a broader commercial release.

Dr. von Jako added, “Importantly, this is the first FDA clearance in the addiction space for any TMS device, and it represents BrainsWay’s third FDA-cleared coil and indication, following the clearance of our H1-coil for patients suffering from major depressive disorder and the H7-coil as an adjunct therapy for the treatment of OCD. This latest clearance cements BrainsWay’s status as an industry leader, and further demonstrates our commitment to leveraging our platform technology to advance innovative therapeutic solutions across multiple patient populations.”

About the Pivotal Study

The efficacy of the BrainsWay Deep TMS System with H4-coil as an aid to short-term smoking cessation was demonstrated in a prospective, double blind, randomized, sham controlled, multi-center trial which enrolled 262 eligible subjects randomized into two groups: an active treatment group treated with BrainsWay’s H4 Deep TMS coil which was designed to target addiction-related brain circuits, and a sham (placebo) control group. Subjects were randomly assigned to either the active Deep TMS group or the sham group. The treatments were performed daily, five days a week for 3 weeks, followed by an additional 3 sessions once a week for 3 weeks (for a total of 18 sessions over the course of 6 weeks).

The primary endpoint of the study was a comparison between the two groups of the four-week continuous quit rate (CQR), representing abstinence during a consecutive four-week period, at any point between the start of treatment and the follow up visit four months thereafter. Weekly abstinence was defined as a subject’s self-report (in a diary) of no smoking, confirmed by urine tests indicating abstinence from smoking. The participants in the study were highly addicted to smoking, with a history of smoking an average of over 26 years and multiple failed attempts to quit.

An important secondary endpoint was the number of cigarettes smoked per day (CPD), per diary entry. The difference in the average number of CPD per subject from baseline to the end of the study (4-month follow-up for quitters and 6 weeks follow-up for smokers) was statistically significantly lower in the active Deep TMS group compared to the sham group (p=0.0311). No seizures were reported in the study, and the most common adverse event reported was headaches, which was not statistically different between the active and sham groups. Other side effects that were reported included application site discomfort, back pain, muscle twitching, and discomfort.

Smoking is one of the leading causes of death in developed countries. The addiction to nicotine, similar to the addiction to drugs and alcohol, involves modulation of the brain reward system and causes uncontrollable desire to smoke. Approximately 38 million U.S. adults smoke cigarettes, and 480,000 die from smoking each year. Cigarette smoking has been found to harm nearly every organ system in the body and is the leading cause of preventable death in the U.S. and of disease burden worldwide (Brian L et al., JAMA Intern Med 2014).

BrainsWay is a commercial stage medical device company focused on the development and sale of non-invasive neuromodulation products using the Company’s proprietary Deep Transcranial Magnetic Stimulation (Deep TMS) technology for the treatment of major depressive disorder (MDD) and obsessive-compulsive disorder (OCD), for which BrainsWay received marketing authorization from the U.S. Food and Drug Administration (FDA) in 2013 (for MDD) and in August 2018 (for OCD). BrainsWay is currently conducting and planning additional clinical trials of Deep TMS in various psychiatric, neurological and addiction disorders.