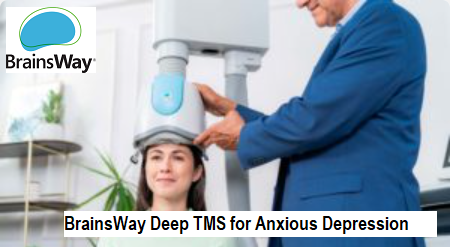 Thus, another mental disorder can now be treated by the BrainsWay Deep TMS Systems in the USA, in addition to major depressive disorder, OCD, and smoking cessation. In Europe, the BrainsWay Deep TMS Systems have already been CE-marked in addition to these four disorders for Alzheimer’s disease (AD), Autism, Bipolar disorder, chronic pain, Multiple Sclerosis (MS), Parkinson’s disease, post-stroke rehabilitation, Post-traumatic Stress Disorder (PTSD), and the negative symptoms of Schizophrenia. Studies are being pursued to gain FDA clearance to treat some of these conditions in the USA. . It is important to mention that the same underlying BrainsWay Deep TMS technology can provide this ever-widening range of treatments

“This clearance expands upon BrainsWay’s depression indication, and represents yet another in a series of firsts for the Company,” said Christopher von Jako, Ph.D., President and Chief Executive Officer of BrainsWay. “Many patients suffering from major depression experience anxiety symptoms. This most recent regulatory achievement further establishes BrainsWay’s leadership position at the forefront of bringing transformative solutions to advance patient wellness.”

Data from 573 patients who had undergone Deep TMS treatment in 11 studies, including both randomized controlled trials (RCT) and open-label studies, was submitted by BrainsWay to the FDA. The data demonstrated a treatment effect that was consistent, robust, and clinically meaningful for decreasing anxiety symptoms in adult patients suffering from a major depressive disorder. An analysis of the BrainsWay data found favorable outcomes with Deep TMS when compared to sham or medication as the standard of care. For example, using the Cohen’s d statistical method, data from the 3 RCT studies of Deep TMS demonstrated effect sizes ranging from 0.34 (when compared to sham) to 0.90 (when compared to medication), and an overall weighted, pooled effect size of 0.55.

As a reference, published articles from approximately 16,000 subjects in over 70 studies of drug-based anxiety treatments – including studies of standard-of-care medications frequently prescribed for patients suffering from anxious depression and general anxiety disorder – report effect sizes ranging from 0.2 – 0.37.

“This clearance is confirmation of what many have believed anecdotally for years – that Deep TMS is a unique form of therapy that can address comorbid anxiety symptoms using the same depression treatment protocol,” said Aron Tendler, MD, Chief Medical Officer of BrainsWay. “We look forward to continuing to work with our providers to bring the very best in care to the patients that have come to rely on BrainsWay’s deeper and broader neurostimulation and our groundbreaking approach to mental health disorder treatment.”

The expanded FDA labeling now allows BrainsWay to market its Deep TMS System for the treatment of depressive episodes and for decreasing anxiety symptoms for those who may exhibit comorbid anxiety symptoms in adult patients suffering from major depressive disorder and who failed to achieve satisfactory improvement from previous antidepressant medication treatment in the current episode.

Since Christopher van Jako took over as president and CEO at BrainsWay, the company has seen remarkable growth and closed the second quarter of 2021 with very positive financial and operational results, with the following highlights:

Comorbid anxiety symptoms are common in patients with major depressive disorder. Between 60-90% of patients with depression have moderate anxiety, and 20-25% have more severe anxiety. In the United States, 17.3 million adults experience at least one major depressive episode per year. Considering the rate of comorbidity, 10 to 16 million adults experience moderate to severe anxiety in addition to their primary diagnosis of depression. Common anxiety symptoms include nervousness, feelings of panic, increased heart rate, rapid breathing, sweating, insomnia, trembling, and difficulty focusing or thinking clearly. The economic burden in the United States for major depressive disorder totaled $326 billion prior to the pandemic.

Founded in 2003, with offices in Burlington, MA, and Jerusalem, Israel, BrainsWay is committed to increasing global awareness and broad access to Deep TMS.

For the latest news and information about BrainsWay, visit www.brainsway.com.

If you want your Company featured in our blogs , news releases, please contact: info AT jlm-biocity.org