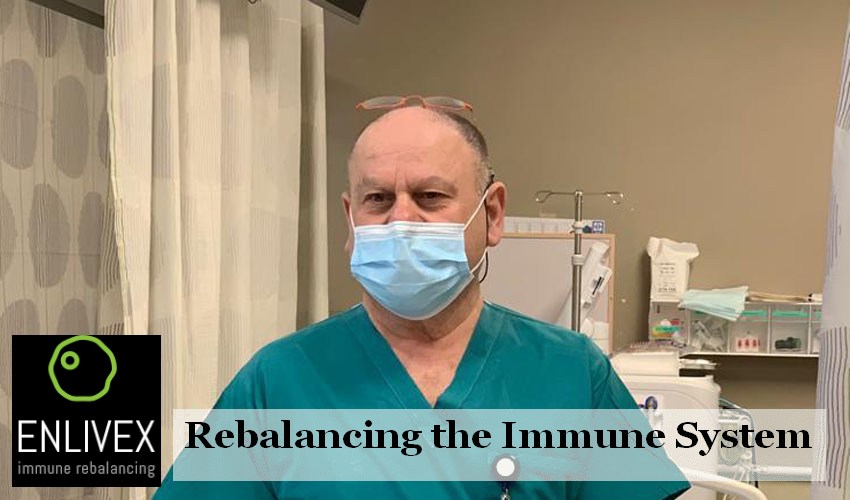 Hadassah Hospital released five fully recuperated patients who were in critical condition with coronavirus, due to their treatment with the experimental drug, Allocetra developed by Enlivex Therapeutics Ltd. (Nasdaq: ENLV; TASE: ENLV). The patients recovered within 5-8 days. At the time of their release, all five patients tested negative for the virus. Enlivex’s treatment is allowed only for compassionate use, that is, for patients in a critical condition for whom no other possibility of treatment remains.

Enlivex chairman Shai Novik says that Enlivex intends to talk with officials at the US Food and Drug Administration, and also with the Ministry of Health in Israel, on the possibility of an emergency use authorization for the product, on the basis of the results of the current trial, even before a controlled trial is held.

COVID-19 infection is accompanied by an aggressive inflammatory response which releases a large amount of pro-inflammatory proteins, called cytokines, in an event known as a “cytokine storm.” This immune response to the virus results in an excessive inflammatory reaction. Studies analyzing cytokine profiles from coronavirus patients suggested that the cytokine storm correlated directly with lung injury, multi-organ failure, and the unfavorable prognosis of severe coronavirus.

The new treatment, Allocetra, which is being developed by Israeli company Enlivex, is an immunotherapy that rebalances life-threatening over-activity of the immune system, using the immune system’s own natural regulation mechanisms to brake the sytokine production.. The treatment, Allocetra, was developed for sepsis, a potentially life-threatening condition caused by the body’s response to an infection
Allocetra is comprised of billions of densely concentrated cells and is infused into the patient’s bloodstream.

Allocetra is designed to prevent cytokine storms and restore a safe immune balance without suppressing the immune system.

The clinical trial of Allocetra included five COVID-19 patients, three in severe condition and two in critical condition. All five patients had complete recovery from their respective severe/critical condition and were released from the hospital after an average of 5.5 days (severe) and 8.5 days (critical), following administration of Allocetra, at which time they were all COVID-19 PCR negative. There were no reported severe adverse events relating to the administration of Allocetra in the patients, and the therapy was well-tolerated.

Therapies such as plasma-based antibodies are typically administered to patients in moderate condition, whereas Allocetra was administered in the study to patients in severe or critical condition. The Company believes that Allocetra, if approved, could potentially cover the gap that currently exists in treating severe or critical COVID-19 patients.

Allocetra was developed on the basis of research by Prof. Dror Mevorach, head of the Internal Medicine and Corona Department at Hadassah, and has already been successfully tried in the past in 10 patients with sepsis, which is considered a serious disease that currently has no cure.

Enlivex chairman Shai Novik said, “We are dealing with the difficult and critical patients, that is, the most challenging ones even among those hospitalized. It’s hard to say how many of the five severely ill patients would have been expected to recover without the treatment, but we certainly would not have expected recovery for all of them.”

Novik says that analysis of the trial is continuing, and that the company will publish further details 28 days after the treatment of the last patient ends, which is the official monitoring period for the trial.

Enlivex‘s product, Allocetra, was developed by Prof. Dror Mevorach, the company’s chief scientific and medical officer. Prof. Dror Mevorach also heads the Covid-19 ward at the Hadassah hospital. The product is designed control the activity of the body’s immune system, which in severe cases of infectious disease is liable to run out of control and itself attack the body, causing worse damage than the virus itself, so that in the end the patient dies because of the activity of the immune system and not from the direct effect of the virus. This is a process known as cytokine storm.

Allocetra is due to enter Phase II (efficacy) trials for treating sepsis, but when it turned out that Covid-19 was causing cytokine storm in severely ill patients, Enlivex decided to apply its product to this problem.

“Even if the coronavirus returns in a different form,” says Novik, “and even if a new pandemic comes along tomorrow from some other wild animal that someone decides to eat, and even if vaccines for coronavirus are not 100% effective, we will be relevant. “The fact that the tests on the five patients came back negative strengthens our assessment that an immune system that does not run amok can better deal with the virus itself.”

Enlivex is a clinical stage immunotherapy company founded in 2005, developing an allogeneic drug pipeline for immune system rebalancing. Immune system rebalancing is critical for the treatment of life-threatening immune and inflammatory conditions which involve hyper-expression of cytokines (Cytokine Release Syndrome) and for which there are no approved treatments (unmet medical needs) such as sepsis and COVID-19, as well as solid tumors immune-checkpoint rebalancing.

In March 2019, the company announced the completion of its merger with Tel Aviv-headquartered Bioblast Pharma, a stock market-listed clinical-stage company developing treatments for rare genetic diseases. Following the reverse merger, Enlivex became a subsidiary of Bioblast, which was renamed Enlivex Therapeutics.
For more information, visit http://www.enlivex.com