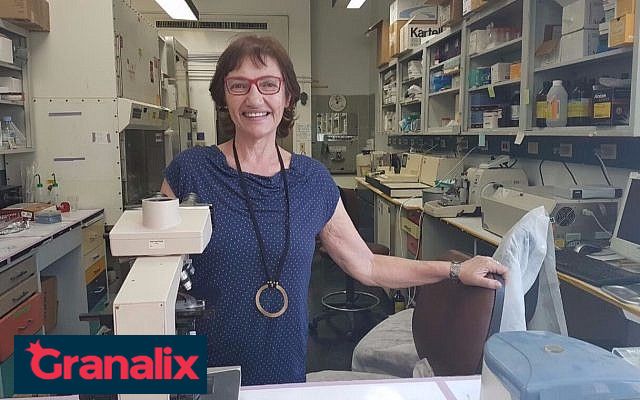 February 26, 2018 – Pomegranates are known to contain powerful antioxidants that fight the oxygen free radicals that cause inflammation, accelerated aging of the tissues, the activation of harmful genes within DNA and an overloaded immune system. Pomegranate Juice has been shown to help both men and women at moderate risk for Coronary Heart Disease. Punicic acid (Omega 5) found in oil made from pomegranate seeds (not the red fruit but the small, hard seeds inside) is among the most powerful natural antioxidants.

Researchers headed by experimental neurology Prof. Ruth Gabizon at the neurology department at Hadassah University Medical Center in Jerusalem’s Ein Kerem, along with Prof. Shlomo Magdassi of the Hebrew University’s Nanotechnology and the Casali Center for Applied Chemistry, have developed a food supplement called GranaGard with high concentrations of punicic acid. This substance converts in the body into conjugated linoleic acid, an established neuroprotector. Hadassit, the Hadassah Medical Organization’s research and development arm, and Yissim, the R&D company of the university, established Granalix. This company markets the supplement (it is made by the SupHerb company in Nazareth), which has been approved by the US Food and Drug Administration (FDA). The supplement (NIS 120 for 60 capsules, a month’s supply, and sold via the company’s website and at some stores) is aimed at preventing or slowing the development of neurological disorders from multiple sclerosis to dementia and even reducing symptoms in patients who suffer from them. As GranaGard is a food supplement, it cannot legally make therapeutic claims, but it can provide data on mice studies in which the rodents showed significant improvement in neurological conditions and benefits shown in patients who have taken the supplement over time.

“Oxidation of proteins and lipids play an important role in aging and neuro degeneration in the brain in general,” said Prof. Ruth Gabizon, a researcher of degenerative brain diseases at the Neurology Department of Hadassah University Hospital in Jerusalem. “Brain cells die over time, from when we are teenagers, and they are not replaced.”

The food supplement’s efficacy in the form of nanodrops taken by rodents with a multiple sclerosis model, CJD and metabolic disorders was proven in three articles in scientific journals, the International Journal of Nanomedicine, Nanomedicine and Neurobiology in Disease. GranaGard was shown to delay disease onset in a mouse model of genetic prion disease, which presents neurodegenerative features reminiscent of Alzheimer’s disease. It also was shown to reduce the disease burden in a mouse model of multiple sclerosis. “There are many other studies on the way,” she said.

“Alzheimer’s and Parkinson’s disease seem to be prion-like diseases with aggregation and oxidation, so punicic acid with this delivery system could be effective, without being destroyed in the stomach and liver,” she added.

Neuropaths recommend pomegranate oil to people, but they don’t take into account that it can’t help against neurodegenerative diseases because it doesn’t reach the brain in the form or ordinary supplements.”

Gabizon, who was born in Argentina and came on aliya with her family at the age of 11, is married to Prof. Alberto Gabizon, chief of the oncology institute at Jerusalem’s Shaare Zedek Medical Center, and they have four grown children.