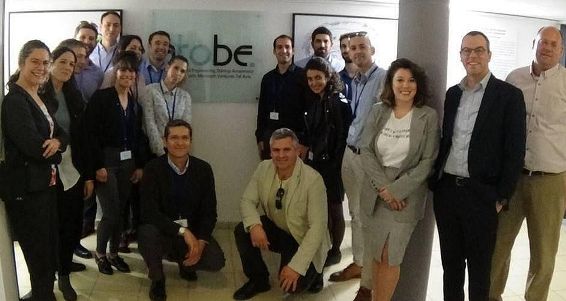 March5, 2018 – The Israeli Ministry of Foreign Affairs cadets were given an overview of the Jerusalem Bio and Life Science Innovation scene by JLM-BioCity. The event was hosted by the Azrieli College of Engineering. Speakers at the event were Prof Deborah Shalev, Head of Pharma Engineering and Michael Mizrahi, Head of AtoBe, the start-up incubator, both from the college, and Fleur Hassan-Nahoum. Member of the Jerusalem City Council, as well as Yaron Suissa and Vitali Shilo, from JLM-BioCity.

Two exciting companies were presented by Anan Copty, founder and CEO of NIMD and Josh Phillipson, vp, bus dev at BiondVax. Anan presented NIMD‘s game changing non contact, non surgical biomed device for painless non invasive removal of breast tumours in one or two treatments in the doctor’s office. Josh presented BiondVax‘s universal vaccine which will hopefully eradicate the flu. BiondVax is going into their Phase 3 clinical trials. BiondVax will be opening their first commercial-scale production facility this summer at the Minerva Park next to Hadassah Medical Center in Jerusalem. Andy David, Director of Innovation, Entrepreneurship & Technology at the Ministry of Foreign Affairs concluded the meeting on the importance of the Israeli diplomatic corps in knowing the innovation and entrepreneurship in Israel.

See a video on NIMD: https://www.youtube.com/watch?v=B8rTvREm9kY

See a video from Israel21C on BiondVax:  https://www.youtube.com/watch?v=1otzomR07j4