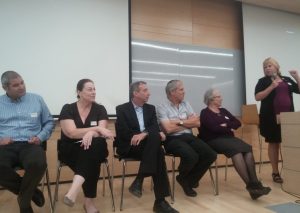 It was a most interesting and exhilarating launch event. Scores of people from all facets of the industry gathered to kick-start JLM-BioCity. New connections were established; old ones were rekindled or strengthened. This is, in part, the essence of JLM-BioCity – creating a synergistic bio-community.

The greater portion of the impressive panel that followed centered upon the elements that are lacking and are requisite in accelerating Jerusalem’s bio-med industry. Many points were raised, many of which were related in one way or another to produce an effective product that has succeeded in clinical trials. It is already a known fact that big companies allot up to two-thirds of their R&D budget to acquisition or collaborations with companies that are in or completed phase 2 trials, thereby bypassing the initial riskier stages and overall reducing R&D costs. But for the professor who thought up an idea and investigated it, the long road to phase 2 crosses countries that the academician often has no idea how to cross, and furthermore the academic lab is not equipped to even complete proper preclinical studies. Thus, the product does not appeal to experienced companies that have the knowledge and capabilities to develop the product, and the professor is forced to abandon it for the sake of other projects that are publishable. To bridge this gap Prof. Marta Weinstock-Rosin suggested establishing a service facility that can perform all necessary pre-clinical studies under GMP conditions.

At this point, the moderator, Dr Tamar Tenennbaum, interjected to explain that GMP stands for Good Manufacturing Practices.

My thought paused for a moment. There was a good portion of students in the crowd, which needed such a basic term explained. I myself went through three science degrees and did not know what GMP was until I entered the industry. I am not sure how many academics and students can stand upon the differences between GMP, GLP (Good Laboratory Practices) and GCP (Good Clinical Practices). They might sound the same, but they are very different regulatory guidelines.

The academia should prepare students for industry as well

It might be natural for the academia to mold students for academia. But, since positions in the academia in Israel are very limited, it has the responsibility to be aware of this and provide education also for the industry, and not only in hardcore science, but also in the circles that surround the scientific activity in the industry. There have been changes in recent years and designated courses have been developed, but these are at the fringes of the main courses and usually attract the students that have already geared themselves towards the industry. The opening of the Biotech MBA program in the Hebrew University this coming academic year is very promising, but it is a whole separate degree, not even in the main campuses of science (Givat Ram and Ein Kerem). I suggest that the M.Sc. programs in life science and medical science will include a requisite course(s) that teaches the basics of the biomed industry – for example the differences between GMP, GLP and GCP and where each one is applicable, what is the process of drug approval (preclinical – toxicity, kinetics etc. – and clinical – phase 1-4); what is considered a medical device (diagnostic, therapeutic, invasiveness etc.), a pharma company and what is a biomed company; what is a small molecule, biologics, gene therapy and cell therapy. These are very basic concepts might not provide ample preparation for working in an industry environment, but will nevertheless supply the student with a foundations on which a more specific training can be built.

After all, the hands that conduct the experiments and propel a company forward are the hands that previously were taking notes in an academic institution.