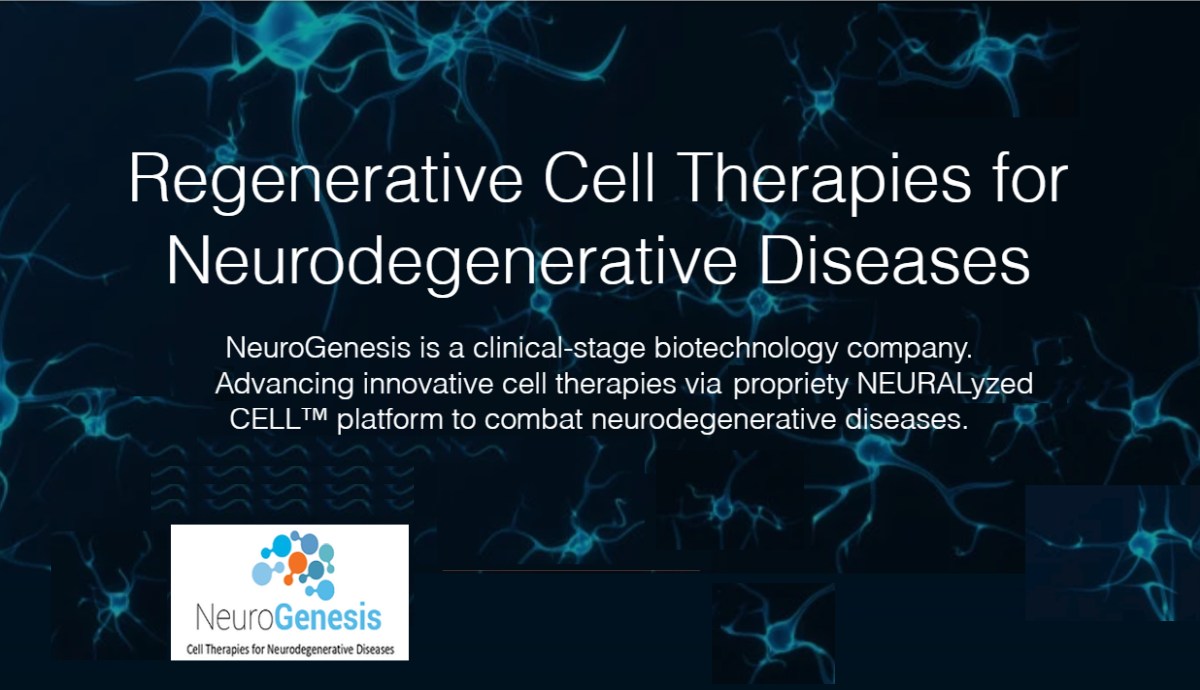 On March 1, 2022, NeuroGenesis and Hadassah Medical Center announced exciting results from their placebo-controlled Phase 2 clinical trial assessing the impact of NG-01 autologous proprietary subpopulation of bone marrow cells on the expression levels of NF-L. NF-L is a reliable biomarker for neuronal damage since it is a protein that is released into cerebrospinal fluid from damaged neurons in patients that have neurodegenerative diseases, specifically MS. High markers of this protein indicate disease activity. Prof, Dimitrios Karussis, Dr. Petrou Panayiota, and Dr. Ibrahim Kassis from Hadassah Medical Center headed a Phase 2, randomized, double-blind, placebo-controlled, trial to assess the transplantation of NG-01. The trial has left patients in better condition than they were in before, some even ditching walking sticks.

NeuroGenesis’ is a clinical-stage biopharmaceutical company that is working to advance innovative cell therapies in order to combat myelin-related neurodegenerative diseases. Their technology uses collected bone marrow from the patient and then through a proprietary process, identifies a unique subpopulation of bone marrow cells. They then culture and enhance these cells towards remyelinating biofactory calls (NG-01). This cell population (NG-01) is then injected directly into the patient’s central nervous system through their cerebrospinal fluid. The cells then zone in on the area that’s damaged and hopefully produce significant amounts of neurotrophic factors.

The trial began with 48 participants who each have progressive MS. At the start of the study, the NF-L concentrations in the patient’s CSF were noted and found to be exceptionally high in almost all the cases (>10,000pg/ml in 22/44 patients). The participants were then randomized into 3 different groups receiving placebo injection, intrathecal or intravenous NG-01 injection. At 6 months following the treatment, the levels of NF-L were collected again and found to be significantly reduced compared to the initial baseline measurements pre-treatment. A median reduction of 63.5% was found which is an excellent result. The placebo group has an increase in NF-L levels indicating an increase in deterioration. 1/15 patients in the placebo group had a reduction in NF-L levels by 50% compared to 9/15 in the IT group.

“Progressive MS is a debilitating disease without effective treatment options that can substantially suppress the progression of disability,” said Professor Dimitrios Karussis, lead principal investigator and Director of MS Center at Hadassah Medical Center, Jerusalem. “This novel trial evaluated not only the clinical effects induced by the stem cell therapy but also the effects on the most reliable and accepted biomarker of neurodegeneration, NFL. We, therefore, believe that our findings are extremely encouraging and taken together with the long-term clinical results, that showed stabilization and even functional improvement in 22 out of the 24 participants up to 4 years after the initiation of treatment, provide substantial optimism for the future of management of progressive MS and neurodegenerative diseases in general.”

“We are extremely pleased to witness the significant protective effect of our NG-01 cells on NF-L and the very encouraging long-term clinical results in MS and ALS,” said Tal Gilat, CEO of NeuroGenesis. “We are currently working on expanding our manufacturing capacity in the US in preparation for our multi-center Phase 2b trial in secondary progressive MS that is planned to begin in late 2022.”

Among those who received the cells in the central nervous system, disease progression froze in 60% of cases. During the second half of the trial, some 73% of the patients who were receiving injections to the central nervous system showed signs of improvement in a combined disability measurement that assesses the ability to walk, move arms, cognitive function, and brain function as documented by neurological examination.

Phase 2, randomized, double-blind, placebo-controlled, clinical trial assessed the safety, tolerability, and efficacy of transplantation of NG-01 in people with progressive MS. The study enrolled 48 participants with progressive MS which were randomized into 3 groups, receiving either an intrathecal or intravenous NG-01 injection or a placebo injection.

The two predetermined primary endpoints of the trial were: (i) the safety of the intrathecal and intravenous NG-01 treatments assessed by incidence of adverse events versus those in the placebo-treated group; and (ii) the differences among the three groups in the Expanded Disability Status Scale (EDSS) score changes and the proportion of patients with treatment failure, as evidenced by an increase in EDSS (disease progression) score, at 6 and 12 months. Overall, the study duration was 14 months.

The company is now planning a large multi-center Phase IIB clinical trial in the US and Israel. The centers will include the University of Rochester Medical Center and the Hadassah Medical Center. The study, which is expected to begin toward the end of this year, will initially recruit 60 patients.

Multiple sclerosis (MS) is an autoimmune disease that causes damage in the myelin and the nerve cells of the central nervous system (demyelinating plaques in the brain and spinal cord), resulting in cumulating neurological disability. The destruction of the myelin (the covering that protects nerves and promotes the efficient transmission of nerve impulses) causes secondary damage to the nerve cells and progressive atrophy. MS often causes sensory disturbances in the limbs, including a prickling or tingling sensation (paresthesia), numbness, pain, and itching. Motor problems are common in people with MS. Affected individuals may have tremors, muscle stiffness (spasticity), exaggerated reflexes (hyperreflexia), weakness or paralysis of the muscles of the limbs, difficulty in walking, and poor sphincter control. The condition is also associated with visual problems, such as blurred or double vision or partial or complete vision loss. There is no known cure for Multiple Sclerosis. The existing treatments are mostly aimed to reduce the incidence of relapses of the disease and slow down the rate of neurological deterioration.

For more than a century, Hadassah has set the standard of excellence for medical care and research in Israel. Hadassah’s doctors and scientists are on the frontlines, uniquely positioned to pinpoint ever-evolving medical needs. Their experience and ingenuity have yielded new ideas with huge potential in all areas of medicine, including therapeutics, diagnostic medical devices, and digital health. Hadasit is the technology transfer company of Hadassah Medical Center in Jerusalem that moves the cutting-edge research coming out of Hadassah into marketable medical technologies.

NeuroGenesis is developing cell therapy for neurodegenerative diseases based on a unique approach for sustained delivery of high levels of remyelinating growth factors using the patient’s own stem cells. The technology for this unique approach was licensed from Hadasit, the Technology Transfer Company of Hadassah Medical Organization in Jerusalem, Israel. The Company’s lead product is NG-01 for the treatment of progressive Multiple Sclerosis, (in which a placebo-controlled Phase 2 study has been completed and recently published). NG-01 were also tested in two successful Phase 2a trials in ALS patients. Up to today, more than 150 progressive MS and ALS patients from around the world have been treated with Neurogenesis’ products via clinical trials (Phase 1 and Phase 2) and compassionate use treatments.