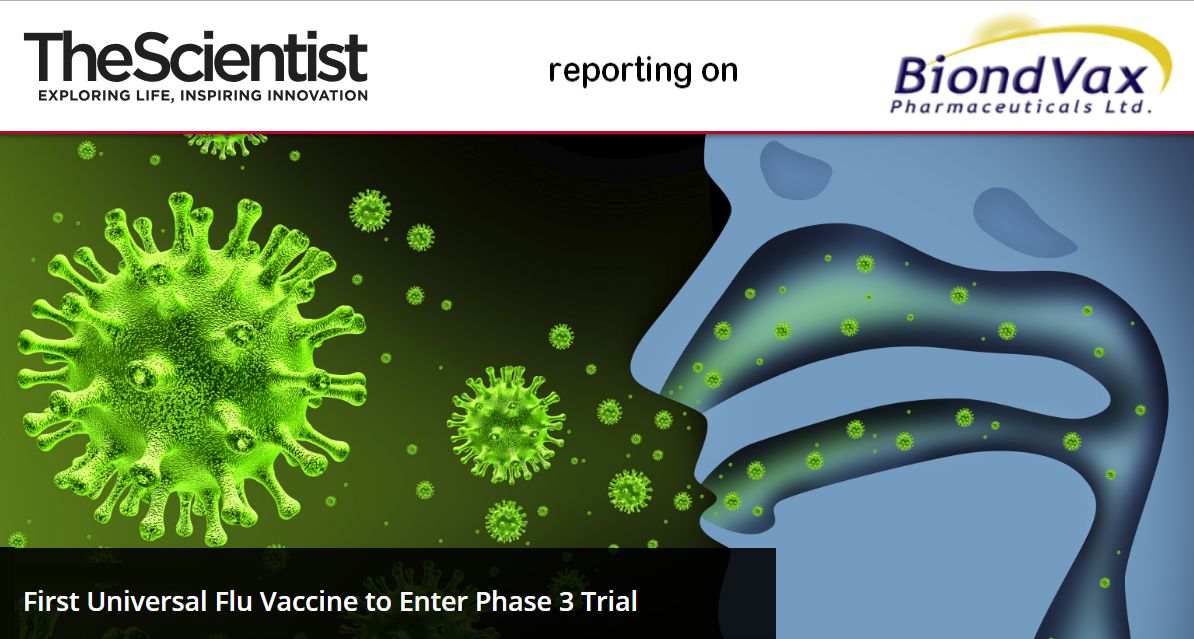 For decades, scientists have been trying to develop a universal vaccine that would protect people against seasonal flu for years, and also against pandemics, which emerge when viral strains completely novel to people’s immune systems start spreading. “A universal flu vaccine is often referred to as ‘The Holy Grail’ of influenza research, and like the Holy Grail, it is challenging to achieve,” Tamar Ben-Yedidia, chief scientific officer of BiondVax, based in Jerusalem, whose universal flu vaccine is now in Phase 3 clinical trials, tells The Scientist in an email.

It has been about 20 years in the making to get to the point of a Phase 3 study—the first universal flu vaccine to have progressed to that stage—and there are numerous others following behind. All of these vaccines employ variations on a similar strategy, which is to generate immunity to parts of the virus that are the least variable from strain to strain.

In February 2018—in the midst of the worst flu season in a decade—the National Institute of Allergy and Infectious Diseases (NIAID) announced that it would prioritize the development of a universal flu vaccine. It also published a strategic plan for achieving that goal, which includes learning more about the influenza virus and its pathogenesis, characterizing the human immune response to the flu, and supporting the development of universal influenza vaccines. To that end, NIAID is funding many universal vaccine trials.

“I think what we’re really interested in is seeing a wide array of products that have promise moving into the clinic and to see the different kinds of strategies being used,” Jennifer Gordon, NIAID’s Influenza Vaccines Program officer, tells The Scientist. “I think right now there are a number of good candidates.”

Influenza has two surface glycoproteins: hemagglutinin, which helps the virus enter host cells, and neuramidase, which helps the virus spread among cells. Hemagglutinin is commonly likened to a mushroom because it has a round head and a stalk. The highly variable head is what seasonal flu vaccines tend to generate antibodies against. The stalk, in contrast, is more conserved, and so is the target of many efforts to generate a universal flu vaccine.

BiondVax’s M-001 vaccine—the furthest along in the pipeline toward a universal flu vaccine—contains no viruses, dead or alive; rather, it is a peptide vaccine. It contains nine, highly conserved viral epitopes, those parts of an antigen recognized by the immune system, that are common to 40,000 influenza viruses listed in a National Institutes of Health database, Ben-Yedidia tells The Scientist. These epitopes come from three different viral proteins: M1 (a matrix protein that lines the viral envelope), NP (a nucleoprotein that wraps around the viral RNA), and conserved parts of the hemagglutinin head.

BiondVax’s trials so far have found that M-001 and a standard flu vaccine have a synergistic effect. While M-001 by itself does not stimulate antibodies against hemagglutinin, M-001 followed by an inactivated flu vaccine does. Further, the hemagglutinin antibodies produced after vaccination with both M-001 and a standard flu shot have broader immunity than those stimulated by the seasonal vaccine alone.

M-001 has already had six clinical trials in Israel and Europe: two Phase 1/2 trials and four Phase 2 trials with a total of 698 participants. Those experiments looked at the vaccine’s safety and immunogenicity, finding that the vaccine was well-tolerated and generated a broad immune response (which researchers measure by drawing participants’ blood, evaluating antibodies, and measuring the levels of molecules, such as interferons and other cytokines, that indicate a T-cell response). In May, a NIAID-sponsored Phase 2 trial of M-001 in adults began in the US.

It’s only with a Phase 3 trial that researchers can examine how well a vaccine protects against influenza. In August, BiondVax launched such a study of M-001 in Eastern Europe with the goal of recruiting about 10,000 participants in two cohorts. The first group will be monitored for two flu seasons—this year’s and next year’s—while the second group will be tracked for one flu season, and the results are expected in late 2020. Volunteers will receive two doses of M-001 or a placebo about three weeks apart. Afterward, the investigators will monitor subjects for any influenza-like illness and compare the number of flu cases in each group.

Normally, a vaccine would only need to show that it reduced the number of cases of the specific influenza strains it targeted. “In contrast, since BiondVax’s M-001 is designed as a universal flu vaccine, we intend to show M-001 reduces illness caused by any influenza strain,” Ben-Yedidia says.