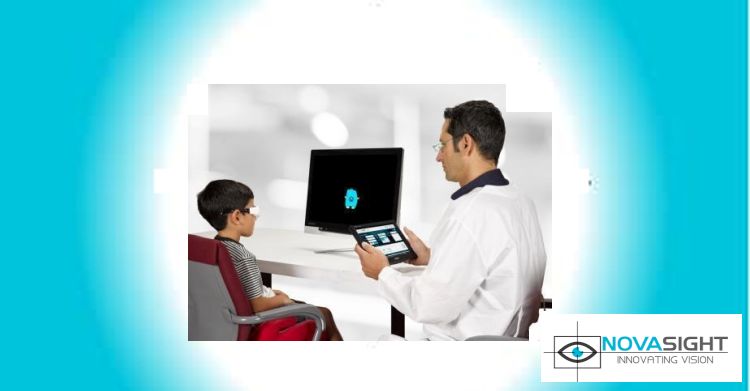 NovaSight system diagnoses eye problems in children and makes it possible to train the eyes in cases of amblyopia (lazy eye) and convergence insufficiency (CI). The company was founded following a problem affecting a friend of cofounder and CTO Dan Oz, who was also a cofounder of colonscopy company Sightline. Oz was looking for a new venture after Sightline was sold to Stryker for $50 million. “Dan’s friend had a stroke that left one of his eyes paralyzed, and he started suffering from strabismus and double vision,” explains NovaSight CEO Ran Yam. “The usual treatment was to partially block the paralyzed eye and see with only one eye. Even though he had excellent sight in this eye, he just couldn’t synchronize with the movements of his healthy eye. Dan’s idea was to photograph the image seen by the good eye and transmit it to the paralyzed eye at the right angle.” In order to ensure coordination with the healthy eye, it was necessary to develop technology for very precise monitoring of the healthy eye’s movements. This is the company’s main patent today.

Yam came to NovaSight from Visionix, which developed software for quality control of eyeglass lenses. After a decade at Visionix, Oz asked him to join him in founding the new company.

The combination of processing and image transmitting capabilities and eye movements monitoring technologies is also suitable for other applications: completing the image in an affected part of the field of vision (in age-related macular degeneration disease – AMD, in which patients lose the center of their field of vision, for example), sharpening an image in areas in which vision is blurred, auditory reading of text a person is looking at but is unable to read, and even facial identification.

With time, however, Yam says, “We realized that even without a photograph of the image, eye movements monitoring technology has important applications.” In 2015, it was decided to convert the company to this sphere, in which NovaSight began operating in 2016, with a focus on diagnosis and treatment of juvenile strabismus. “The juvenile market is far more accessible. Adults are less technological. It’s harder to persuade them to change. It’s easier to recruit children for a trial,” Yam explains.

A problem of focus, not attention deficiency disorder

The main conditions that NovaSight is able to diagnose are lazy eye and CI. “Lazy eye is caused when strabismus or large differences in sharpness of vision in each eye makes the brain unable to unify the vision from each eye, resulting the brain ‘ignoring’ one eye. The neglected eye becomes blind or half-blind.” Yam says that this problem should be diagnosed by age 3, and NovaSight’s system does this by monitoring the eyes’ movements. It tests whether both eyes are focusing on what is happening on the screen.

The conventional treatment for lazy eye is training the weak eye by covering the healthy eye with an eyepatch for a specified period. Many people, however, are unable to persist with this training day after day. “We developed our eyeglasses so that they cover one eye at all times, but the change takes place so that the child barely notices it. He can then do the training easily while watching television or any screen he chooses,” Yam says.

“5-13% of the public suffers from convergence insufficiency, meaning ‘a lack of focus.’ The muscles aren’t strong enough to focus on an object very close to the eye,” Yam adds. “Children say, ‘I don’t want to read; it makes me tired,’ and their parents wrongly think that they have attention deficiency disorder. Testing each eye separately won’t discover this problem at all. In a test of both eyes, the problem will be detected only if the test is performed after a physical effort.” In this case also, eye monitoring technology will help diagnose the problem while any television content is being viewed. The eyes can be trained by transmitting the image to the place on which the person wants the eye to focus.

Yam says that the current training for CI and other strabismus problems is “manual and a little primitive. They ask the children to following the movement of a pencil for 15 minutes. Very few of the children and their parents have the patience for this and no one checks whether they do it right. Improvement occurs in only 40% of the children.”

The system has already been clinically tested on adults and is now being tested on children. The product has been approved for marketing in Europe, and NovaSight is negotiating with an international company to integrate its products in the devices being sold to ophthalmologists’ clinics. “We’ll need FDA approval in order to sell in the US market,” Yam says.

The system will initially be sold to doctors and optometrists according to a repeat revenue model: sales of the system at a low price and charging a fee per test. The goal is to also put the device in mother and baby clinics and kindergartens for survey tests. “We believe that by the end of this year, sales will already begin in Israel and Europe.”