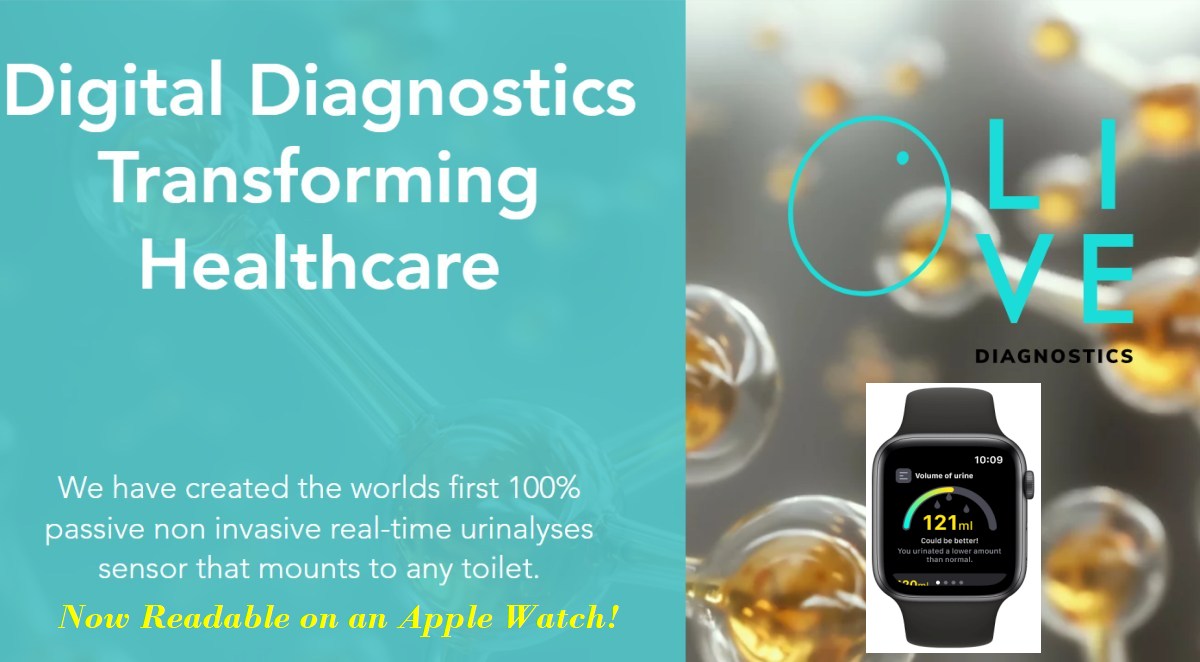 Jerusalem-based Olive Diagnostics’s KG system is the world’s first 100 percent passive non-invasive real-time urine analysis sensor that can be hooked up to any toilet. This system can provide real-time health alerts, early detection, and progression of diseases. Early detection for many diseases leads to an earlier treatment when the cure is simpler. The KG system is expected to save many people from having their sickness develop to the point where hospitalization is required.

Now, Olive WatchOS, an app that communicates via Bluetooth with Olive Diagnostics’ KG toilet-mounted sensor to display real-time health data based on passive urinalysis, is available on the Apple Watch. An android version is planned to come out later in 2022.

The app will have a portal for the user and a portal for the medical caregiver. The app is free for individual use and is available by monthly subscription to registered caregivers who have been trained to use the Olive KG and can use the app to track the measurements of multiple users.

The system generates information on red blood cells, protein, ketones, and creatinine as well as other urine characteristics such as volume, pressure, and color.

The data received by the KG system is processed in the cloud to identify biomarkers for conditions including kidney stones, urinary infections, and even impending heart failure. If any issues require immediate attention or the onset of symptoms is detected, the system sends an alert to a relevant caregiver, and the ongoing analysis can flag emerging problems early.

The KG system uses an array of 64 LEDs at different frequencies spanning from the high UV at 350nm to Near Infrared (NIR) at 2,500nm. The LED array is mounted in the front of the toilet and projects to the back of the toilet where there is an array of six photodiodes as receivers.

The KG system has been in third-party clinical trials conducted by TechnoSTAT Clinical Services (an international clinical trial management, and monitoring company) at the Hadassah Ein Kerem Medical Center in Jerusalem. In tests designed to mimic the traditional urine stick method, KG delivered a sensitivity rating of 92.8 percent and a specificity of 95.5 percent, compared to 80 percent and 95 percent for a stick test. However, by measuring over time, the trial found that the KG system achieved a sensitivity rating of 98.7 percent and a specificity rating of 100 percent on simulated five daily urinations.

In the clinical trial at Hadassah Ein Kerem Medical Center, over 100 KG systems were in use, producing around 30,000 measurements a month. A second clinical trial involving hundreds of KG systems in assisted living and home care facilities in Holland is about to commence, and a third large-scale pilot will soon be launched with Maccabi Healthcare Services in Israel.

“I believe that within five years, our system will be in every home, office, and gym,” Guy Goldman ,CEO and founder of Olive Diagnostics, predicts, adding that the company is constantly expanding the portfolio of biomarkers that the system can detect.

The system is named KG in honor of his late mother, Karen Goldman, and its initial target market is the remote monitoring of elderly people. When Guy Goldman’s mother was diagnosed with cancer in 2017, he was shocked to discover that there was nothing available that could monitor her health without interfering with her daily routine. Guy was working abroad at the time and was very stressed out that he could not follow his mother’s ordeal.

Guy decided to develop such a system: “For me, it was a personal problem that needed to be solved,” he says. Guy established Olive Diagnostics in 2019.

Olive Diagnostics  is looking to raise Series A funding during the first half of 2022 to support its growth.

Jerusalem-based Olive Diagnostics was founded in 2019 by CEO Guy Goldman and Corey Katz, a medical practitioner focused on wellness, based in California. Guy previously founded OptimizeIT, which he sold to NASDAQ company Better Online Solutions. The CTO is Dr. Yaniv Oiknin, a BGU graduate, and also on the development team is Ofer Melamed, a neuroscience Ph.D. from Weizmann. Olive Diagnostics has also recruited a team of data scientists.

Olive Diagnostics has secured almost $4 million from Cleveland Clinic, Amgen, Israeli Innovation Authority, eHealthVentures and private European fund Venturing, and American investors. The company plans to work with assisted living facilities, outpatient facilities, and telemedicine providers in Europe to provide the service. Olive Diagnostics has completed its ISO 13485 certification, a critical milestone necessary for CE certification, and is in the FDA pre-submission phase for the United States.

Maccabi Entrepreneurship is the lead investor in the current series which aims at achieving $5 million.

If you want your company featured in our blogs, news releases, please contact: info AT jlm-biocity.org