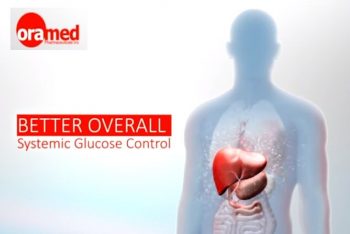 Oramed Pharmaceuticals Inc. (NASDAQ: ORMP) (TASE: ORMP) (www.oramed.com), a clinical-stage pharmaceutical company focused on the development of oral drug delivery systems, announced that it has initiated a food effect study in the U.S. for its oral insulin capsule ORMD-0801.

CNN quoted Oramed CEO Nadav Kidron in a June 25 article “Insulin pill instead of shot: How close are we for diabetes patients?” :
“A year from now we will better know the potential of our drug to control and maintain blood glucose levels and will have further proof of the longer-term benefits of taking an oral pill versus an injection,” Oramed CEO Nadav Kidron said in a news release in May. Last month, Oramed Pharmaceuticals launched the largest and most advanced clinical trial of its own oral insulin pill, under the direction of the US Food and Drug Administration. The trial involves 240 patients with Type 2 diabetes.

About Oramed Pharmaceuticals
Oramed Pharmaceuticals is a technology pioneer in the field of oral delivery solutions for drugs currently delivered via injection. Established in 2006, Oramed’s Protein Oral Delivery (PODTM) technology is based on over 30 years of research by top scientists at Jerusalem’s Hadassah Medical Center. Oramed is seeking to revolutionize the treatment of diabetes through its proprietary flagship product, an orally ingestible insulin capsule (ORMD-0801). The Company completed multiple Phase II clinical trials under an Investigational New Drug application with the U.S. Food and Drug Administration. In addition, Oramed is developing an oral GLP-1 analog capsule (ORMD-0901).

For more information, the content of which is not part of this press release, please visit www.oramed.com