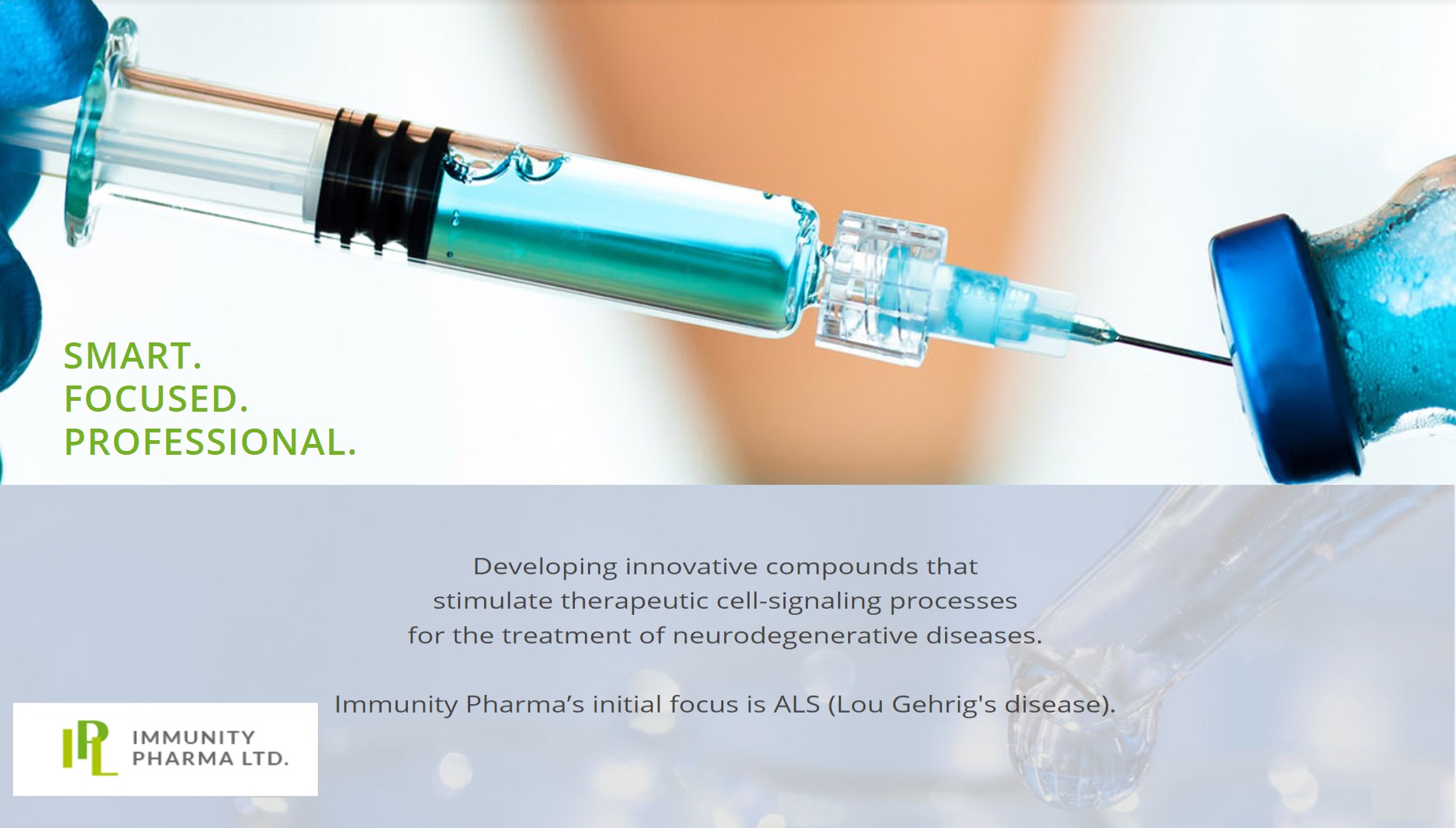 The new treatment being developed by Immunity Pharma may give ALS (Lou Gehrig’s Disease) patients hope. ALS is an “orphan disease” – one that affects few people. In the U.S., orphan diseases are defined as those that affect fewer than 200,000 people. ALS has an infection rate of about 2 in 100,000 in the U.S. annually. People with ALS generally die within five years of contracting the disease.

Immunity Pharma, a clinical-stage neurology-focused biopharmaceutical company, announced interim results from its Phase 1/2a clinical study with IPL344, an Akt activating disease-modifying drug for the treatment of ALS. In this early stage clinical trial, disease progression rate during IPL344 treatment was about 50% slower than expected without treatment, in both functional and respiratory endpoints (ALSFRS-R and SVC, respectively). The drug also demonstrated a very favorable safety and tolerability profile. These results reflect a potentially favorable impact on patients’ quality of life and are well established predictors for patients’ survival. Testing for an Akt activation biomarker demonstrated target engagement, confirming IPL344’s ability to activate the pro-survival Akt pathway in patients suffering from ALS.

The Phase 1/2a trial is an open-label, dose-ranging study with once-daily IPL344 treatment of rapidly progressing ALS patients. Subjects enroll into a 28-day Phase 1 safety study that is followed by a long-term open-label Phase 2a efficacy study. Patients started treatment at ALSFRS-R values between 22 and 38 (on a 48-point scale). At this stage of the disease ALSFRS-R deterioration is linear, or even faster than linear, as established by the analysis of ALS progression in large populations. So far, 8 patients have completed the 28 days safety study. No drug related adverse events were observed in any of this study participants.

Six (6) patients were treated beyond 4 months, for an average duration of 8 months (4 – 13 months). Among these 6 patients the deterioration rate of ALSFRS-R was 49% slower than before treatment (p=0.08). Change in disease progression was observed starting mainly after the first two months of treatment. The disease progression rate beyond these first two months, i.e., during the remaining 6 months (on average) of treatment, was 61% slower (P=0.03) than before treatment (as measured in 6 months on average before treatment). The projected linear deterioration rate is an established surrogate for a placebo group in early clinical trials in ALS; it is based on a large body of published research, studying disease progression in thousands of untreated ALS patients. During the average 8 months of treatment study participants lost, on average, 4.7 fewer ALSFRS-R points compared to their projected loss assuming a linear deterioration rate (i.e., their own pre-treatment deterioration rate).
The effect on respiration was measured by Slow Vital Capacity (SVC). Average SVC loss in the general ALS population (including slow progressors) is known to be 3.1% per month for patients with ALSFRS-R<40. During IPL344 treatment the 6 participants lost only 1.3% SVC per month on average, representing 57% slower deterioration in respiration.

These observations are in line with earlier data obtained from single rapidly-progressing patient treated with IPL344 under a compassionate treatment protocol. That patient, who started at an advanced stage of the disease (ALSFRS-R=15), lost only a single ALSFRS-R point during the first 22 months of IPL344 treatment. The compassionate treatment patient survived under treatment for a total of 26 months, much beyond expected survival for a patient at that stage.

IPL344 activates the Akt signaling pathway directly within the cells. The Akt pathway is responsible for protecting cells against destructive processes that are the main drivers of ALS: cell-death, inflammation and aggregation of misfolded proteins. Akt is down-regulated in ALS, exposing cells to these destructive processes. However, activating Akt in patients remains a challenge as many potential Akt activation-pathways are disrupted during the disease. IPL developed a clinical pharmaco-dynamic biomarker that quantitatively measures Akt activation in patients. Biomarker data from patients in this Phase 1/2a study confirm, in a statistically significant manner, that IPL344 restored Akt activation levels in patients back to their normal levels. This confirms target engagement under disease conditions, and demonstrates the remarkable capability of IPL344 to activate Akt in patients suffering from ALS.

“The results presented so far, in Immunity Pharma‘s clinical trial and the preceding compassionate treatment with IPL344, are encouraging. This is said with the necessary caution given that it is based on 6 patients that were treated for 8 months on average, and a compassionate patient treated for 26 months. While establishing efficacy requires a large placebo-controlled study, the magnitude of the effect observed in this study, if repeated in a larger pivotal study, will have a clinically meaningful impact on ALS patients. We are looking forward to continue the collaboration with Immunity Pharma towards further development of this drug” said the study’s principal investigator Dr. Marc Gotkine, head of the ALS clinic, Hadassah Medical Center, Jerusalem.

“We have shown that our drug engages the Akt pathway, which is rapidly gaining recognition as a key pathway in ALS. We are pleased that even given this number of patients, the ongoing Phase 2a study showed a clinically-significant disease-slowing effect on both functional and respiratory scores (compared to patient’s projected deterioration trajectory),” said Eran Ovadia, Immunity Pharma‘s CEO. “Together with our outstanding team of ALS clinicians, IPL is now planning a placebo-controlled pivotal trial with IPL344. We are encouraged by the sizable magnitude (about 50%) of the disease-slowing effect observed in this small study. Our goal is to establish this large effect in the pivotal trial, especially as even drugs with smaller magnitudes of effect are considered a great step forward.”

About the Phase 1/2a ALS Clinical Trial

The Phase 1/2a trial is an open-label, dose-ranging study with once-daily IPL344 treatment administered IV (home administration). Subjects are allowed to stay in the study for up to 3 years. The study includes a 28-day Phase 1 portion, after which subjects may continue to the Phase 2a portion of the study. The study is expected to include 15 ALS patients and is conducted at the Hadassah Medical Center in Jerusalem. All participants are rapidly progressing ALS patients, with above median ALS progressing rate as measured by change rate of the standard disease score ALSFRS-R (ranged 0 to 48, healthy). The patients started treatment at ALSFRS-R values of 22-38. All 7 subjects of Cohort 1 were already recruited to the study (a daily dose of 3.2 mg/kg of IPL344), with subjects are currently being recruited into Cohort 2 (8 subjects; a daily dose of 4.5 mg/kg of IPL344). The study’s primary efficacy endpoint is change in ALSFRS-R, with secondary endpoints including SVC and muscle function.

IPL344 is Immunity Pharma‘s lead drug candidate. IPL344 was discovered in the Weizmann institute of Science, Israel, at Prof. Irun Cohen’s Laboratory. IPL344 is being developed as an intravenous injection for the treatment of ALS and is currently in a Phase 1/2a clinical trial in ALS patients. IPL344 activates the Akt signaling pathway in a variety of cells, including neurons, inducing pro-survival and anti-inflammatory processes. IPL344 received orphan drug designation from FDA and EMA, the European medicines agency.