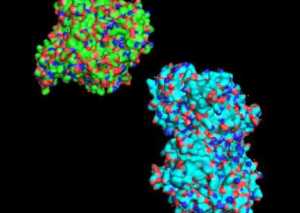 Multi-cell organisms have developed through evolution two main approaches to reproduction – the first, characteristic of “lower” life forms is to produce many off-springs at minimal energy cost per offspring; the second, predominant in “higher” life forms, is to bear one or a limited few number of children, but to invest a great deal of resources in each descendant.

Pharmaceutical research, for the most part, has adopted the first approach. Throw all sorts of chemicals on cells or protein targets and see which one causes the desired effect; or synthesize many peptides and perform a two hybrid test to see which peptide, by chance, will interact with the target protein. It is a shot in the dark.

Needless to say that such an approach can be time consuming and resource demanding. It also requires a rapid, high-throughput system to assay many molecules with relative quickness. Altogether, this means a lot of money.

Pepticom has brought the future to the pharma industry. The combination of sophisticated programming incorporated into the life sciences is moving the pharma industry into a new evolutionary stage. Using artificial intelligence and machine learning, the algorithm developed by Pepticom, designs a peptide(s) that would best interact with a given protein structure in silico. The algorithm also provides the calculated properties of each peptide, such as affinity and solubility. Such a process not only dramatically cuts the cost and duration of drug discovery, but can also propose peptides for unknown active sites.

Singling out possible cures in silico

Glycogen storage disorder type IV is a recessive autosomal disease caused by mutations in the glycogen branching enzyme (GBE) gene leading to glycogen that is less branched and thus less soluble. Deposition of the mal-constructed glycogen accumulates in organs and tissues – such as liver, muscle and the nervous system – causing cell death and tissue damage. Currently there is no effective treatment to treat this rare disease. Pharmaceutical companies are not likely to undertake the long, expensive and arduous journey to develop a treatment for such a small market. Pepticom was able to shortcut this journey by suggesting a designed peptide that binds to the mutated protein, stabilizes it and increases its activity to a level of expected clinical significance. Pepticom’s algorithm circumvented the lengthy and expensive trial and error process, and hit the mark directly. This is a telling example of the importance of changing the methodology of drug discovery, to facilitate faster and more insightful development.

Pepticom is currently engaged in a vast range of activities, including pharma giant Eli Lilly’s open innovation program for various indications including type II diabetes, the German Fraunhofer-Gesellschaft for adjuvant discovery, and with the Israeli agricultural company Adama.

Pepticom is located in the Malha Technological Park (GATI), Jerusalem and is a JLM-BioCity sponsor.