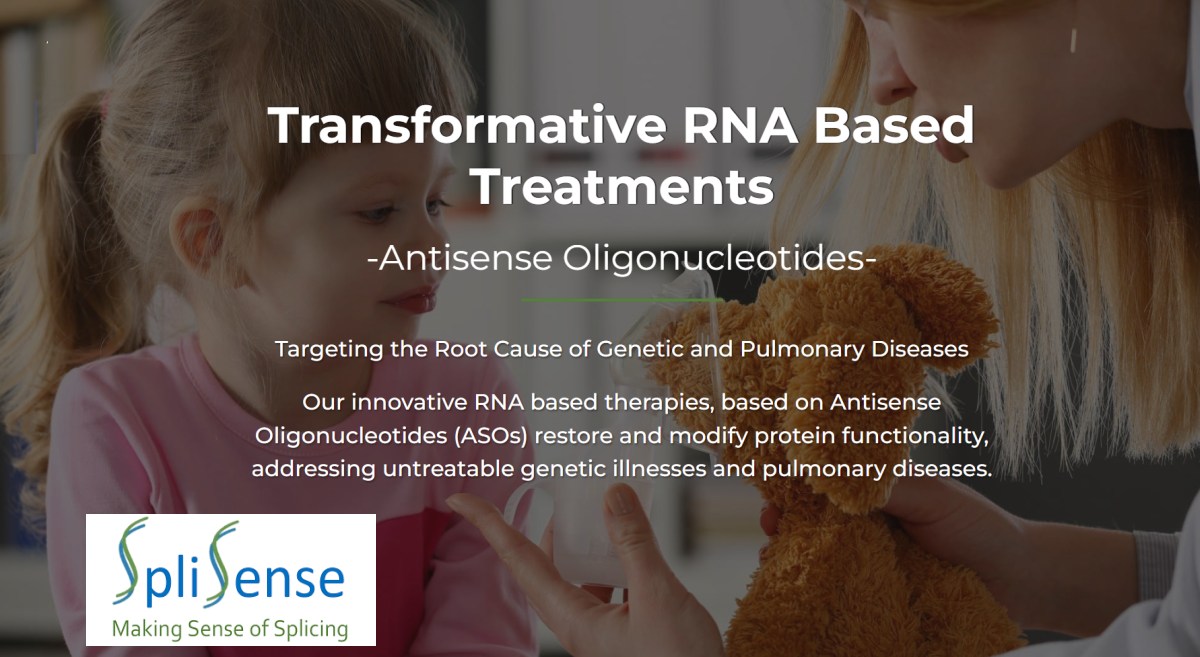 Jerusalem-based Splisense, a biopharmaceutical company developing transformative mRNA altering therapies for cystic fibrosis (CF) and other pulmonary diseases, has been granted orphan drug designation (ODD) to SPL84-23-1 by both the U.S. Food and Drug Administration (FDA) and the European Medicines Agency (EMA).  SPL84-23 is an Antisense Oligonucleotide (ASO) targeting the 3849 mutation in the Cystic Fibrosis Transmembrane conductance Regulator (CFTR) gene associated with a severe form of CF lung disease. Splisense innovative approach focuses on unmet needs in pulmonary diseases and targets the root cause of the disease, to overcome specific genetic mutations and restore protein function.

Splisense’s technology is built on the research of Batsheva Kerem, a geneticist from the Hebrew University of Jerusalem, who was part of the research group that first identified and cloned the CFTR gene. Splisense licensed the technology from Yissum, the technology transfer office of Hebrew University. Their technology leverages short, precisely targeted proprietary RNA segments called ASOs to correct mutations in the CFTR mRNA. The ASO binds to the mutated CFTR RNA in the appropriate location, eliminates the mutated region from the mRNA, and allows the cell to manufacture functional CFTR proteins.

“The  FDA and EMA Orphan Drug Designation to SPL84-23-1   is a vote of confidence in our platform technology and early-stage therapeutic pipeline,” said Gili Hart, executive officer of Splisense. “CF is a debilitating disease, leading to frequent lung infections, breathing difficulties, and reduced life expectancy. Currently available treatments focus on treating the symptoms of the disease, such as channel function and protein modulators, antibiotics to treat lung infections, or mucus thinning drugs. However, they do not treat the root cause of the disease. Splisense‘s technology addresses the underlying genetic cause, thereby offering, for the first time, the hope of restoring adequate lung function to CF patients.  We are looking forward to initiating the clinical trial with SPL84-23, which is expected to commence in mid-2022 in multiple centers in the US, Europe, and Israel.”

Cystic fibrosis (CF) is a genetic disease that leads to respiratory infections and disabilities and affects over 90,000 people worldwide.  It is caused by mutations in the CFTR gene, leading to dysfunctional CFTR proteins.  Disease-causing CFTR protein variants create irregularities in the transport of ions, – generating mucus obstructions, chronic infection, inflammation, and even respiratory failure.  Over 2000 variants in the CFTR gene have been identified, and over 400 are known to cause disease.  The past decade has seen a dramatic change in CF care. However, approved CFTR modulators do not support all patients with CF or offer a cure for the disease.  Thus, new strategies of medication development are essential to address non-responsive mutations.

Orphan-drug designation is granted by the FDA to a drug or biologic intended to treat a rare disease or condition, which generally includes a disease or condition that affects fewer than 200,000 individuals in the U.S.  ODD granted therapies entitle companies to development incentives including tax credits for qualified clinical trials, exemptions from certain FDA application fees, and the potential of seven years of marketing exclusivity in the event of regulatory approval.

EMA is a decentralized agency of the EU responsible for the scientific evaluation, supervision, and safety monitoring of medicines in the EU. Orphan designation is a status assigned to a medicine intended for use against a rare condition.  Orphan medicines benefit from ten years of exclusivity and additional incentives.

SPL84-23-1 is an antisense oligonucleotide (ASO) targeting a specific splicing defect in CFTR, the 3849 mutation, which generates an aberrant splice site in the CFTR pre-mRNA, resulting in the inclusion of 84 intronic nucleotides as a cryptic exon in the CFTR mRNA.  This 84bp cryptic exon contains an in-frame stop codon that leads to degradation of a significant fraction of the mRNA as well as to the production of truncated non-functional CFTR protein.  Treatment with SPL84-23-1 ASO has been shown in preclinical models to enable the production of a fully functional CFTR protein and therefore has the potential to treat the CF disease associated with the 3849 mutation.

Splisense utilizes short, precisely targeted proprietary RNA stretches called ASOs to correct various mutations in the CFTR mRNA  In particular, the ASO binds to the mutated CFTR pre-mRNA in the desired spot, leading to the elimination/masking of the mutated region in the mRNA and allowing the cell to produce functional CFTR proteins.  The ASOs are administered directly and preferentially to the lungs via inhalation where it is taken up by the lung cells and drive the production of corrected CFTR mRNA and eventually functional CFTR proteins. Splisense utilizes proprietary algorithms to support the design of optimized ASOs thereby maximizing efficiency and reducing the potential for undesired off-target effects.

For additional information, please visit our website at www.splisense.com,

If you want your company featured in our blogs, news releases, please contact: info at jlm-biocity.org