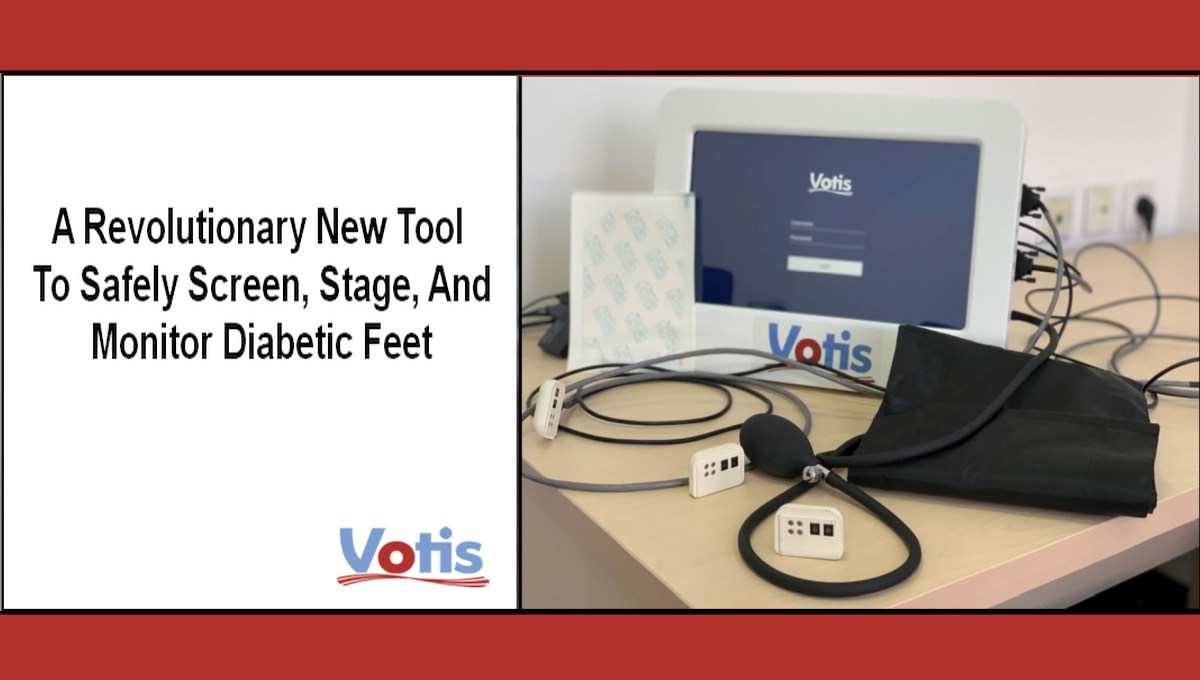 VOTIS Subdermal Imaging Technologies Ltd. has started enrolling the first patients in the feasibility study of its PedCheck™ device at Hadassah Medical Center in Jerusalem, Israel

The pilot study, entitled “The Use of Hemodynamic Occlusive Vascular Response (HOVR™) technology to screen for Peripheral Arterial Disease (PAD)”, is intended to test the feasibility, usability, and safety of VOTIS‘s proprietary PedCheck™ device. The PedCheck™ is in development and has not yet been approved or cleared for sale.

Merrill Weber, Co-Founder, CEO, and President of VOTIS, stated, “We are proud to begin our clinical trial at Hadassah Hospital. Hadassah is one of the leading medical centers in the world, known for its use of advanced technology. Hadassah’s participation underscores the growing awareness of the importance of early identification and measurement of PAD.”

Peripheral arterial disease (PAD) in the legs or lower extremities is the narrowing or blockage of the vessels that carry blood from the heart to the legs. It is primarily caused by the buildup of fatty plaque in the arteries, which is called atherosclerosis. PAD can happen in any blood vessel, but it is more common in the legs than in the arms.

VOTIS‘s device, PedCheck™, will enable doctors to easily assess the condition of the feet of people with peripheral disease. The VOTIS device generates objective and reproducible data.

The device is designed to non-invasively measure the specific locations of PAD deep within the patient’s foot. It does this by directing light into the foot from patches that are attached to the skin. Changes in the light enable the device to measure peripheral artery disease deep within the foot, even before symptoms appear. In a procedure, a pressure cuff is inflated and deflated around the patient’s thigh, while the PedCheck™ directs infrared and near-infrared light into specific locations within the foot. By measuring the scattering and absorption of that light, VOTIS calculates oxy-hemoglobin, deoxyhemoglobin, and total oxygen saturation. Thus the PedCheck™ is expected to provide the treating physician with useful information about the location and severity of the disease.

There were over 200 million individuals with PAD worldwide in 2022 – with about 8.5 million individuals with PAD just in the United States and 16 million in the EU. Because it has been difficult to determine if people have PAD, many remain undiagnosed, even if they are in a risk group for PAD, like smokers and people with diabetes. VOTIS will change that by finally providing PedCheck™, a simple to use, inexpensive device that will enable doctors to easily detect PAD in the feet of people.

According to the PAD Action Plan (pages 29-30), published by the American Heart Association last week: “Complications associated with PAD, including amputation, are detrimental to patients and costly for the health care delivery system. Complications may be prevented if risk factors are detected and addressed early in the progression of PAD….Despite its prevalence and adverse impacts on patients, PAD is often underappreciated and underdiagnosed….Although professional societies and national U.S. health care organizations recommend screening for PAD using the ABI [Ankle-Brachial Index], the U.S. preventive Services Task Force recently concluded that the evidence for PAD screening with ABI is insufficient. As a result, screening remains unavailable to many patients at high risk [emphasis added]….This is a critical gap: early detection of PAD is essential for optimizing its management to prevent lower extremity amputations and reduce heart attack, stroke and death.”

Early detection is crucial. The PAD Action Plan notes (on page 8) that “some patients with PAD never become aware of their disease, attributing their leg symptoms incorrectly to ‘slowing down’ with age. In the most tragic example of this phenomenon, some patients do not become aware of PAD until they are diagnosed with severe limb-threatening PAD, and the first treatment they are offered is amputation.”

The prevalence of diabetes is rising in both dlower- and middle- income countries (LMICs), and Western countries; such as the United States and the UK, particularly among young adults and children. The VOTIS technology is especially suited for use in LMICs, as the devices are non-invasive and do not use X-rays or other ionizing radiation, as well as being inexpensive.

PAD can cause foot ischemia, in which blood flow (and thus oxygen) is restricted in the foot. When a person with PAD gets a cut, a nick, or even an abrasion on his or her foot, the wound may not heal, and instead may develop infection or gangrene, requiring amputation. Diabetic foot amputations are associated with increased illness and death. A person with diabetes is substantially more likely to undergo a lower-extremity amputation than someone who does not have diabetes. People with PAD also commonly have progressive vessel obstructions elsewhere in the vasculature, and experience increased rates of myocardial infarction (heart attack) and stroke.

According to Yechiel Gellman M.D., Orthopedic Surgeon at the Hadassah Medical Center and the Principal Investigator of the study, “There is a need for an efficient and accurate tool for PAD assessment in specific populations, such as the patients with diabetes who visit our diabetic foot unit. This feasibility study addresses a need that my colleagues and I confront daily in our practice.”

VOTIS Subdermal Imaging Technologies Ltd., a Jerusalem-based startup started in 2017, was co-founded by  Merrill Weber, a corporate and securities lawyer as well as a series entrepreneur, and Prof Andreas Hielscher, professor emeritus at Columbia and the founding chairman of the Department of Biomedical Engineering at NYU’s Tanden School of Engineering.

VOTIS Subdermal Imaging Technologies, Ltd. is developing a suite of devices to help people with PAD to keep their feet. The PedCheck™ will measure the depth and severity of PAD. The PedFlo™ will provide information about changes in blood flow in the foot during a revascularization procedure. Both devices use VOTIS‘s proprietary HOVR™ technology, which was developed at Columbia University and has been licensed to VOTIS on an exclusive, worldwide basis for all medical imaging purposes. HOVR™ technology is safe, non-invasive, and free of ionizing radiation.